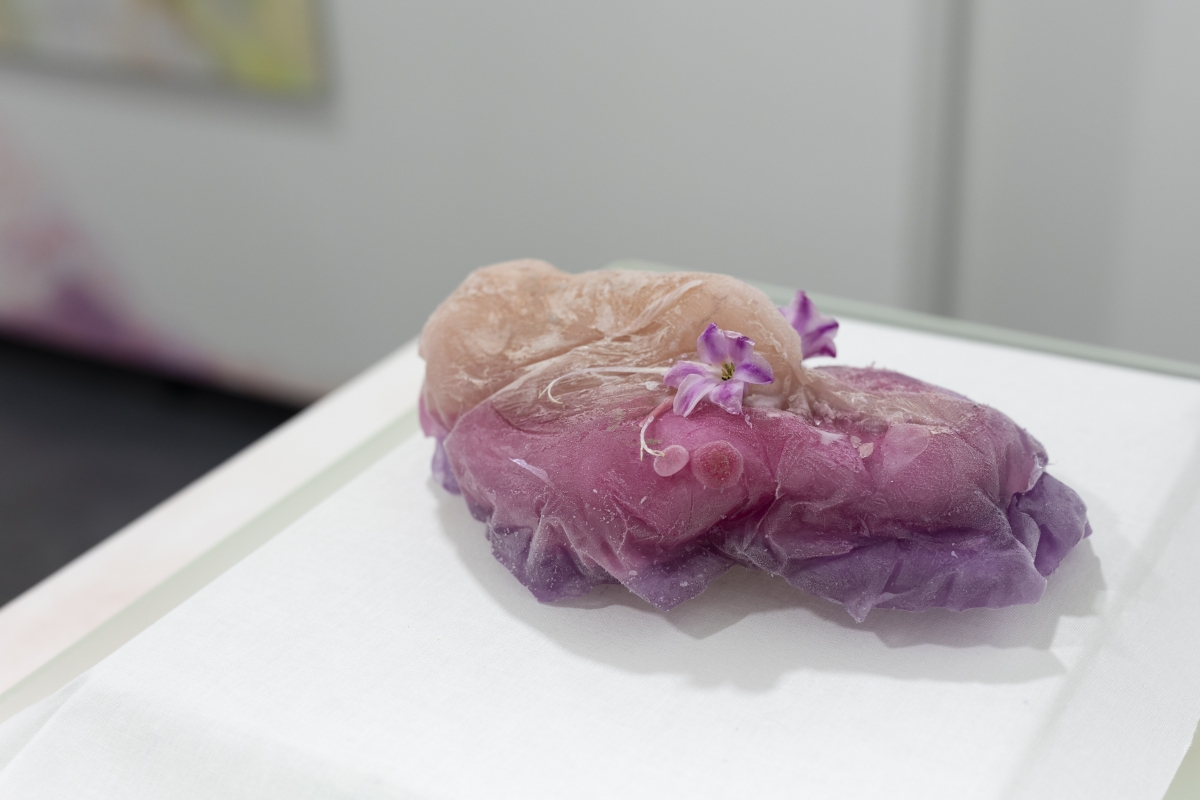 The concept of water is closely related to how we produce it. The professor and researcher Jamie Linton emphasises social relations, discourse and ecology as prominent factors in studying the perception of water in contemporary society. Water is not neutral, and does not come from nowhere; it depends on our values, our behaviour and our approach to nature. Water fluctuates and has a history. It is not only a substance, but also an idea. To understand what water is, it is necessary to ask what its place and its time are.[1]

At present, the modern, global concept of water formed within the framework of the Western late era of capitalism. The 18th-century French chemist Antoine Lavoisier and his followers ‘purify’ water to a scientific chemical compound, known by the initials H2O, and it becomes a product of the Age of the Enlightenment. According to the philosopher, theologian and social critic Ivan Illich, in this way water loses its semantic values of cultural place and time, and remains only a colourless, transparent, tasteless and odourless substance, which is easily used in managerial discourse. At the end of the 20th century, the concept of modern water works on a global scale, the global hydrology narrative strengthens, and water crises become a worldwide phenomenon. In the global hydrological context, the isolation of water from social relations and place fosters alienation, indifference and unworkability in the face of crises.[2] Reacting to the anthropocentric abstract concept of water, Jamie Linton suggests a hydro-social cycle concept, in which water is culturally and socially treated as an alternative to understanding hydrological sciences. This way of understanding stresses the potential of water and humans to change the social approach to ecology. 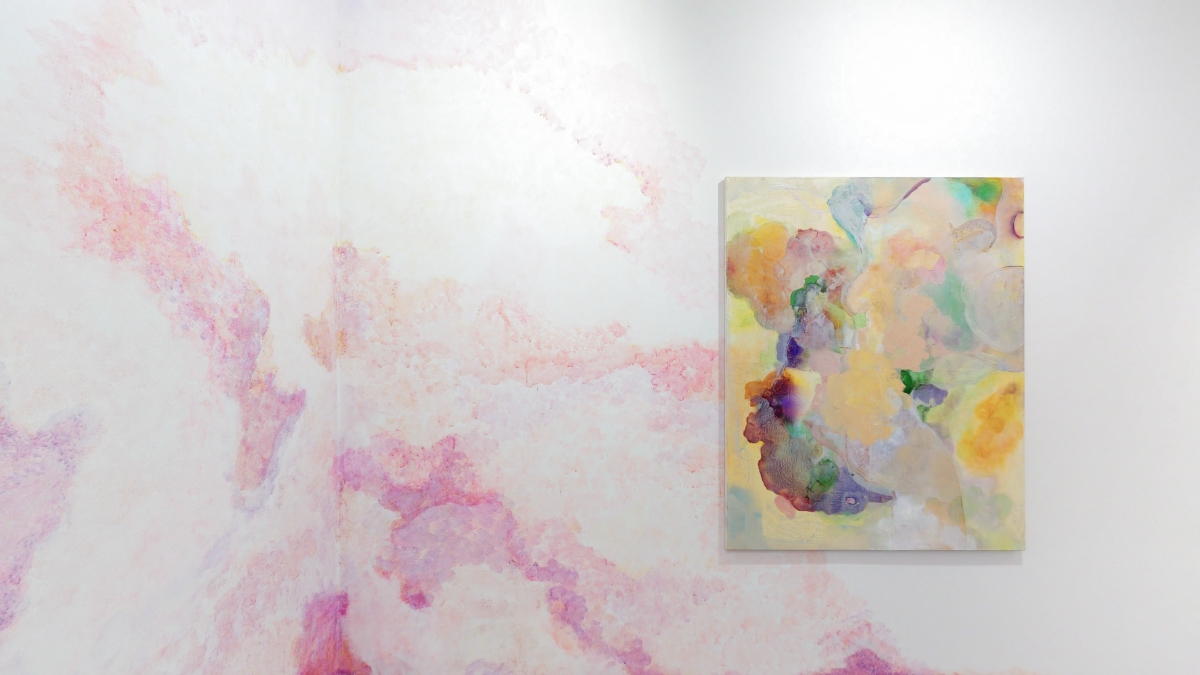 In April, the exhibition by the young artist Auksė Miliūkaitė ‘River Flowing in the Veins’ opened at the Rooster Gallery. Its location is beside the River Vilnia and the century-old watering place where you can find the first water pumping station, and since when the water supply history of Vilnius has been recorded.[3] In this historical, industrial and cultural entanglement, the artist invites us to come together with water, while engaging the memory, time, and the imagination.

On entering the exhibition, we find ourselves in an oasis in which a new viral mould has spread: pink in colour, it might be harmless (?), and it leaves identical traces of sea sponge. The mould is at its greatest point of spreading in one of the two gallery rooms; it starts in the corner of the wall, hides behind the paintings, slides under the wall, and disappears. Going along the underground corridors, it passes the ‘secret’,[4] aromatherapeutic steam cavity and reaches the other room of the gallery. It has changed its form: now it is a transparent, pink and fluttering fabric, and recalls skin. In the trajectory of this migrating, transforming, visible-invisible creature, the artist’s paintings, watercolours, drawings, icy sculptures, a book of memory, sound and scent, are all drenched in the water of dreams.

In this exhibition, urbanised city water turns into archetypal water, or in the words of the French philosopher Gaston Bachelard, water of dreams, which activates our dreams, reveries and imagination.[5] The dominating fluid aesthetics opens up a broad spectrum of watery substances. For her paintings, the artist mixes organic pigments, acrylics, oils and plant root dye. For her drawings, she uses lava sand and spring water, or algae. And sometimes she even swims wrapped in a piece of canvas in the spring, thus leaving traces and marks on the surface. For her icy sculptures (there are 16 of them), which change every working day at the gallery, the artist uses milk, sand, her blood (asking for a sample after donating blood), pigments, algae, ash, flowers, berries, oil, juice, river water and petrol. During the day, the icy sculpture melts on a tiny canvas, and leaves a trace of time which is different every day, depending on the fluidity, texture and colour of the substance. The icy sculptures are in the shape of waste (plastic packaging, dental graves, alginate masks) found near bodies of water. Hence, the artist asks herself what she eats, uses and consumes, where the waste goes, what the human’s relationship is with the natural resources and the earth, and what kind of traces we leave behind, and simultaneously imagines what kind of life forms might develop after we are gone. 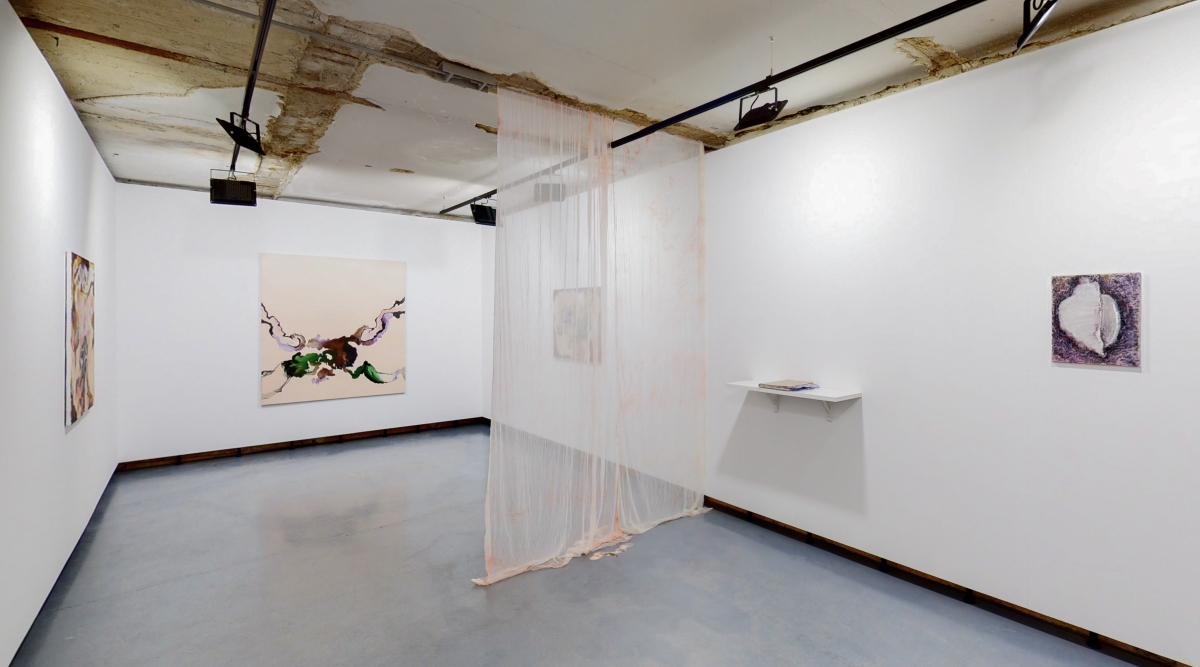 According to the philosopher N. Katherine Hayles, we know the world because we are involved in it, and because it affects us. While scientific knowledge does not guarantee respect for the environment, it provides a framework that fosters interactivity rather than alienation.[6] Active social engagement in water processes might bring change. One way to deconstruct the global water phenomenon is reflected in Auksė Miliūkaitė’s art. Through sound, smell and sight, she slowly and subtly activates a visitor’s sensations, and involves the visitor in an experiential water journey. Collecting water from different places, the artist recorded its sound at the same time, thus creating the shifting soundscape enriched with memory in the exhibition space. Every day, the smell also differs, she has created various life smells (shells, Baltic Sea algae, etc), and presents them in the form of steam, which triggers an individual associative experience in nature. Sticky puddles on the floor and the doors give the impression of incompleteness, flow and natural chaos. Even though neither the exhibition text nor the works implicate only one narrative of the exhibition, the artist has created a place in the city centre where it is possible to stay and become acquainted with different shapes and transformations of water in social, ecological, cultural and urban terms.

[4] ‘Secret’ or ‘Sekretas’ is a popular children’s game in Lithuania, where you collect flowers, rocks and other particularities, put them in a hole in the ground, cover it with a piece of glass, and put more sand on the top. And the most important thing in the game is secrecy.

[5] Gaston Bachelard, Water and Dreams: An Essay on the Imagination of Matter, 1999, Dallas, Dallas Institute of Humanities and Culture. 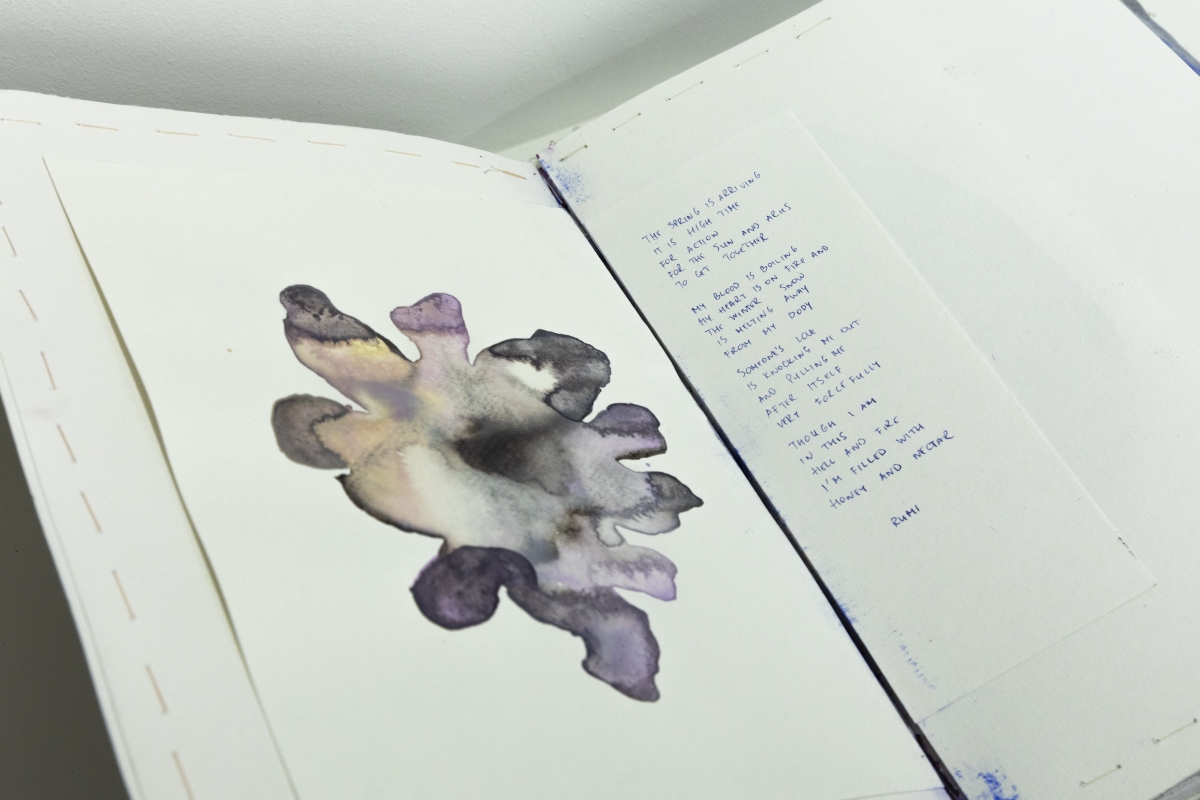 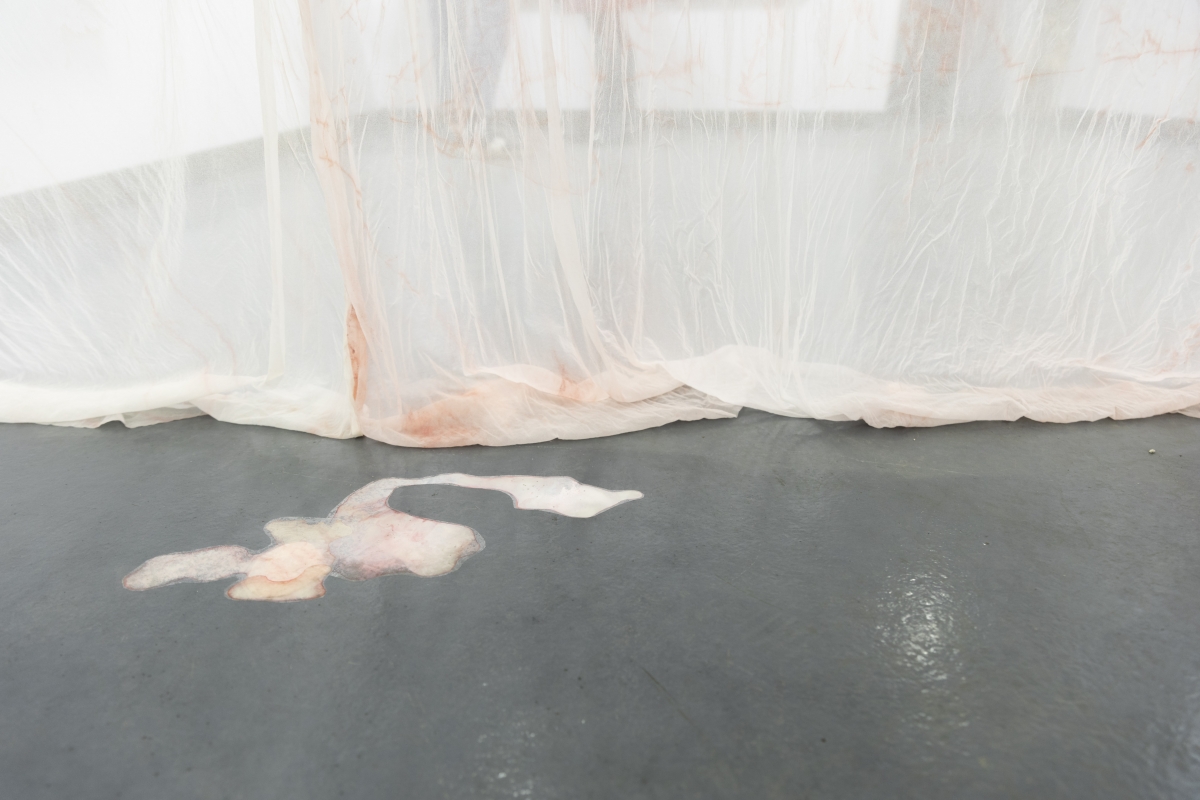 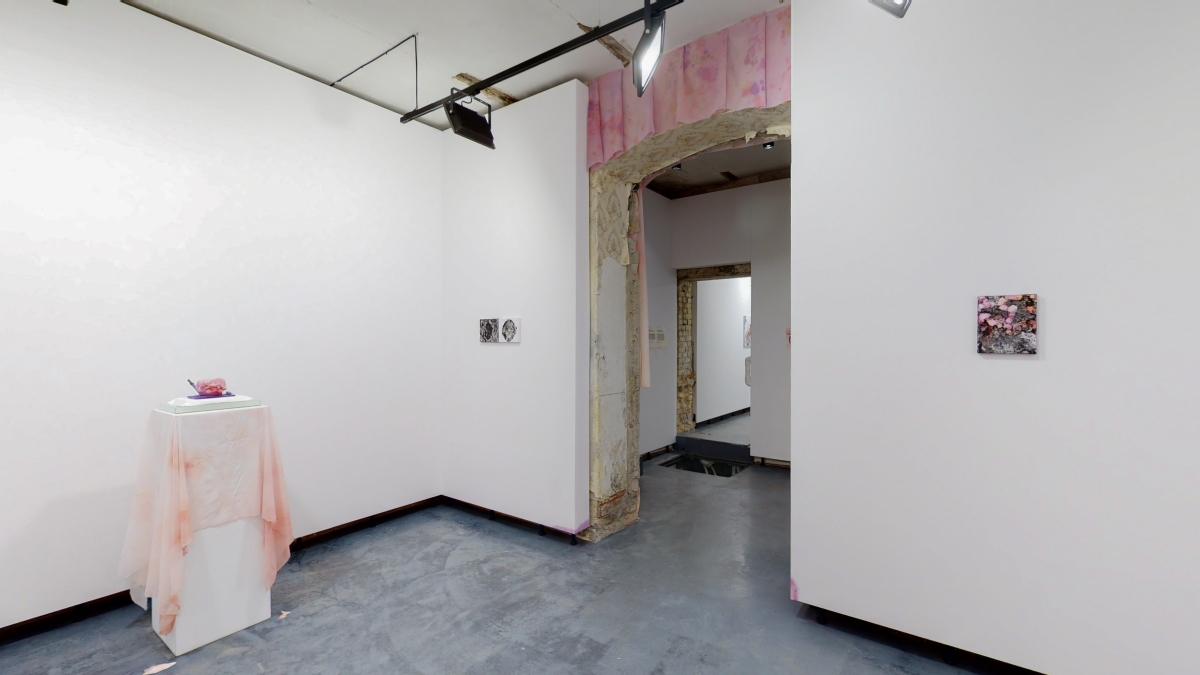 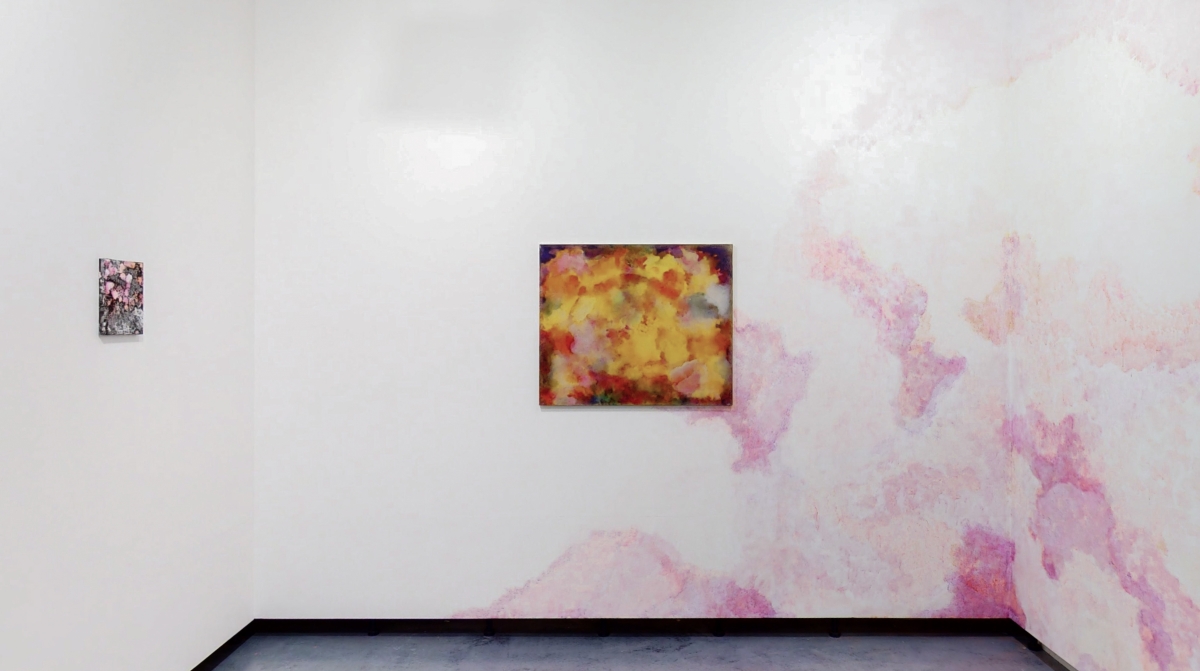 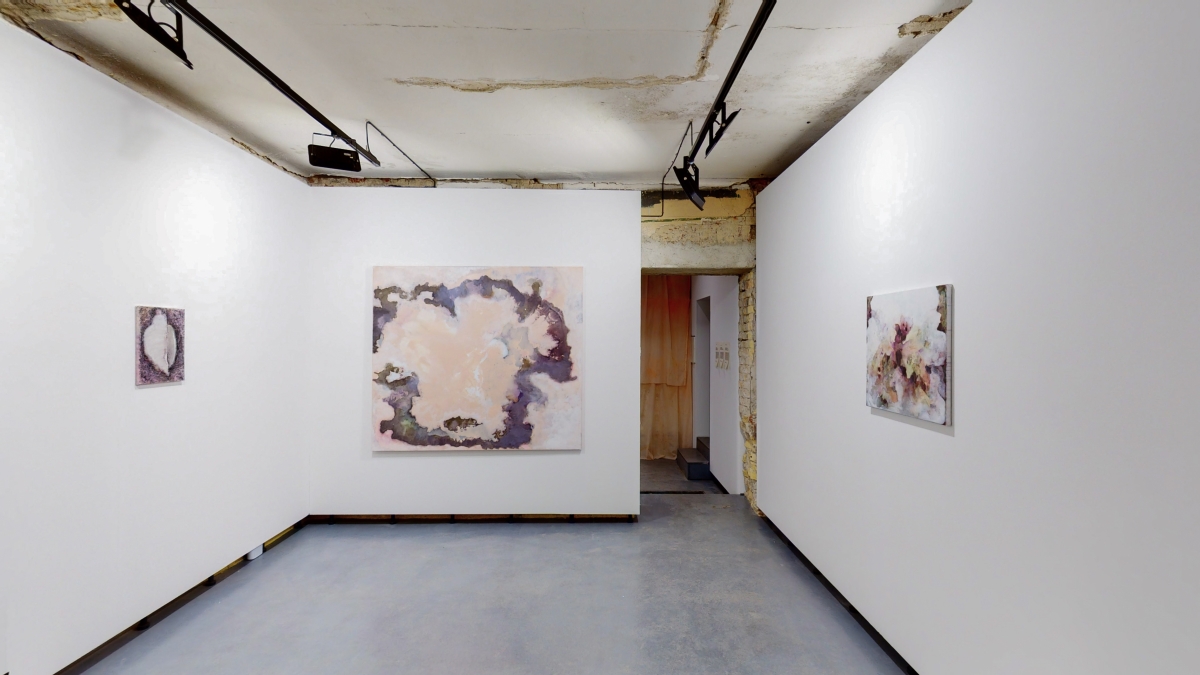 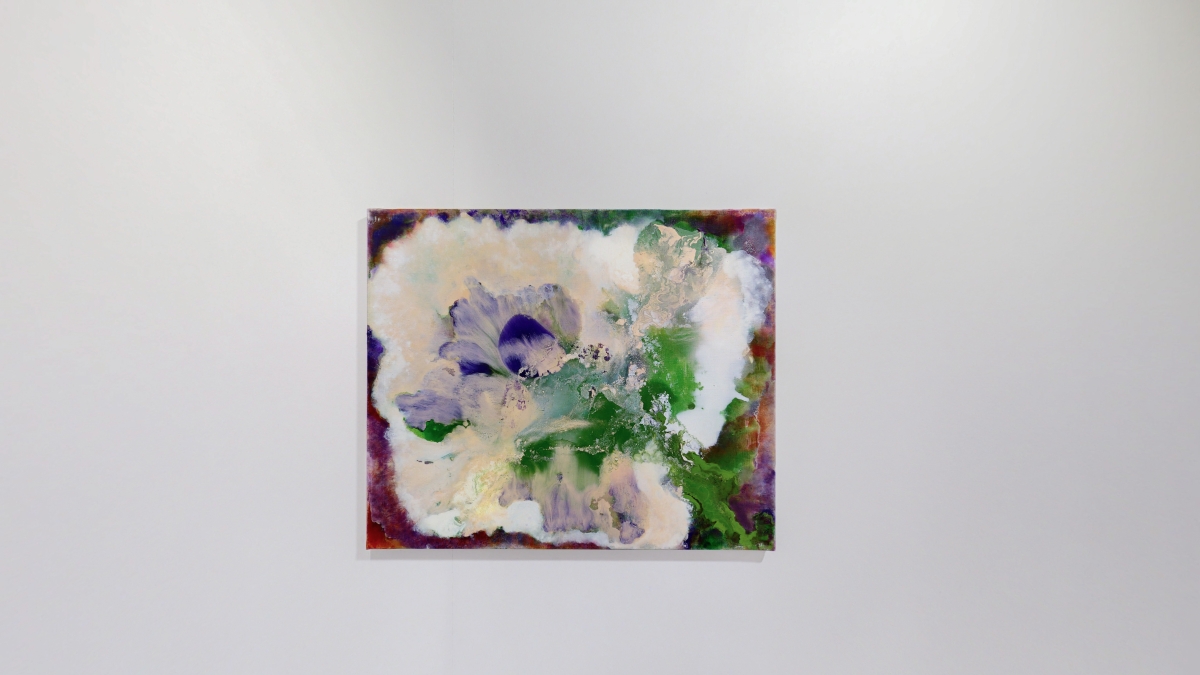