The Biennial: In Flux or Dead End Street? 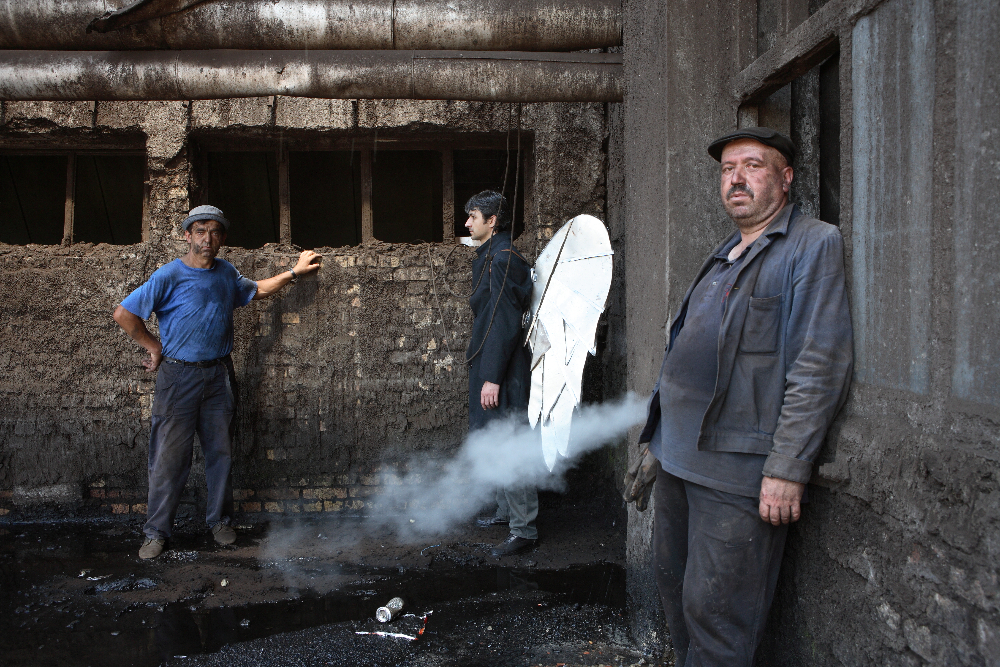 Organized primarily by LCCA (Latvian Center for Contemporary Art), the exhibition “Re: visited,” curated by its director Solvita Krese, intends to question and understand the role of biennials as phenomena. This task has been approached by a number of critics and curators; it is becoming more difficult to justify time and money going into these events during times of economic or political upheaval, recession or impasse. Select works from biennials were highlighted (e.g. the Venice Biennial, Kassel’s Documenta, the Istanbul Biennial, the Moscow Biennial and the European Biennial of Contemporary Art).

The power to exhibit (or not) in any space leads one to consider whether or not those in control of spaces are fairly utilizing the space in question, or on the contrary: those in charge of exhibiting spaces are manipulating their position of power or being manipulated by other external forces. It is no secret that artists who gain public exposure via exhibitions and the media outlets which support such spaces by writing about them reap benefits; they are readily recognized as artists in the public eye, they are discussed and sought after for future inclusions, rewards and collaborations. The curator explains, “The exhibition is a subjective view that tends to zoom in on otherness reflected in various forms of knowledge. Different experiences rooted in a multiplicity of cultures and social textures may create tension between affiliation and non-affiliation, between inclusion and exclusion or extrusion.” Aspects of ‘Otherness’ which appear most significant: artist exhibiting versus artist not exhibiting, curator curating versus curator not curating, space used to exhibit versus space unused or ignored.

“Re:visited” is paradoxical; it rehashes and recycles select works which were already presented in their original contexts. This was a conscious decision. The nature of removing works from their initial context is that they can never be viewed again taking the same considerations into account, some such being: location, curatorial time constraints, applied thematic inquiry, the stage of the work displayed (e.g. old, semi-recent, new, in progress). What is troubling about this exhibition though is the unavoidable question as to whether or not energies of highlighting again the problematics of the biennial event prove to be useful or engaging. Is the real and/or hypothetical audience who indeed cares about these events still limited to those who find themselves directly participating in them? Or have biennials managed to encompass and speak to a more generalized public, as well as those desiring to be part of them in the future?

Does this show ‘beat a dead horse,’ or bring up issues which have been circulating among those who regularly attend and frequent such events? Yes. Yet, this exhibition is not invalid. It has streamlined the banter circulating amongst artists, curators and organizers internationally connected or intrigued by these events. Much comes from exhausting a topic of concern—any topic. We are now formally forced to move on with this conversation and now approach the stage where individuals must propose clear, definite solutions for restructuring the art world and ways in which biennials and similar large-scale events are justified (or not). Boredom is dreadful, but oftentimes, it is the final motivator to choose another path all together, to destroy and recreate.

The concept of the biennial is not new. They have been around for as long as I can remember being fascinated with art. Yet, they are not the only way in which individuals can create art, cultivate situations and respond to current issues which may or may not be socio-politically driven, depending on the goals of those involved. Many individuals take initiatives on a daily basis to create and respond to relevant issues of social change, freedom and progress.

What is intriguing about this exhibition is its location; works displayed and appropriated from international biennials were from locations outside the Baltic region. Not one work from a Baltic biennial or triennial is represented in this exhibition—there is an absence of Baltic-based large-scale events represented in this show. The only Baltic representation is the exhibition itself and its location, hinting to the fact that the Baltic region appears to be an afterthought, possessing an underrepresented position—fighting for attention. This void leads one to believe that the focus should not be on highlighting again the works from these other biennials, but instead: creating equally competitive large-scale platforms within and among the Baltic states.

Among the numerous works on view, the show includes the Norwegian-Danish artist Ann Lislegaard’s black-and white, cryptic video Oracle, Owl … Some Animals Never Sleep (2012-2014), originally viewed at the 12th Lyon Biennale. Also on view: Antonio Vega Macotela’s Time Exchange (2006-2010) which is a project of 365 distinct exchanges that the artist had with inmates at the Santa Martha Acatitla Prison in Mexico City; he replaced money with a time-sharing system where tasks were executed during agreed-upon time slots and documented. The artist views the product of each exchange as a work of art, in-and-of-itself. Polish artist Pawel Althamer’s exhibited video Sunray (2012)((http://www.berlinbiennale.de/blog/en/projects/sunray-a-project-by-pawel-althamer-28649)) was a response to Minsk’s off-kilter law that individuals congregating in the street is considered illegal assembly, among other unreasonable offenses such as hand-clapping in the street. Althamer documents 150 people in golden suits marching two miles to meet and greet the sun—a gesture not only perceivably ‘abnormal’ but in the capital of Belarus: unlawful.

Many works uphold a political position or contribute social commentary, representing other regions of the world. Amongst works which unravel or expose controversial issues in “Re:visited” are Umida Akhmedova’s photo series Mothers and Daughters-in-Law (2011-2013) which highlights Uzbekistan’s marriage culture incorporating the ‘bride-husband-his mother’ triad where the young woman is removed and alienated from her family all together to join her new husband’s clan; Croatian artist Igor Grubic’s Angels with Dirty Faces (2008)((http://catalog.manifesta9.org/en/grubic-igor/)) is a response to contradictions and power plays which thrived under Milošević’s regime affecting local coal miners; Jumana Manna and Sille Storihle’s collaborative video Goodness Regime (2013)((http://www.jumanamanna.com/project/upcoming/)) takes the viewer on an investigative journey unpacking Norway’s self-image and its prescribed ideologies. The video was filmed in Palestine and Norway, presenting a patchwork of mesmerizing performances by children and documentary footage of the Crusades, 20th century wartime and the Oslo Agreement.

The power of particular works is minimally connected with the fact that they were shown within the context of any biennial in question. Artists, at least the good ones, always find a way to make works happen without having to slide into presupposed frameworks; both their voices and positions immediately change when they forfeit their singular autonomy. Arguably, there is obvious merit and benefits in working with others in these larger collaborative designs, but some merits trump or override others. A creative’s independence is unavoidably compromised by being at the whim of tourist-driven, economically conscious events; influences pushing and pulling on participating artists cannot be avoided. Furthermore, “Re:visited”’s exhibition text notes:

It would be naive to view an art work as an autonomous entity, because the ideological, geopolitical and institutional contexts of any exhibition are not neutral—nor is the dramaturgy of its arrangement. On the other hand, we can affirm that although the context of an exhibition contributes to the meaning of an art work, it does not anticipate that the meaning or essence of the art work is a result of the exhibition.

Oftentimes, the curator (or co-curators) chooses specific works to be displayed for the artist, thereby molding how the artist will be represented. Of course, there are exceptions and alternatives to this method (e.g. allowing artists to create new site-specific works of their own design, allowing artists to choose which work(s) should be displayed) which curators adopt when in conversation with participating artists. It remains important that curators and those in organizational roles adopt and execute varied stances of interaction and order. Collaboration is not always an attractive option; sometimes nothing is gained by working together except heartache, lost time, stretched resources and bittersweet failure. But losing can be the fuel to re-try, clean the slate, pursue something new or change course entirely.

Without a doubt, biennials harbor a distinct political agenda—one influenced by economics, trends and the state of the world. It remains important to monitor how goals and ambitions of biennials line up with what they present (or do not present) to their audience—and a farther removed general public which may appear to be less interested, when the truth may actually be that they cannot pinpoint an accessible entry because they were never the target audience to begin with.

“Re:visited” strives “to offer a subjective view which encompasses otherness reflected in various types of knowledge.” It is commendable yet befuddling that LCCA and Riga Art Space investigate tensions between belonging and incongruence in relation to the biennial, especially since the Baltics are not forerunners when it comes to organizing the events in which they aspire to examine. Is this exhibition a gesture of one art scene hinting at its overarching exclusion affecting its region, hence the emphasis on the ‘Other’ or the decision to include works and biennials which are not Baltic-based? The exhibition itself is an example of the Baltic region’s own state of exclusion and peripheral position—cleverly played. Or: is this exhibition a representation of the divisions which still exist between word and action, thereby continuing to feed the simplistic perspective of ‘Us’ vs. ‘Them’ by not providing solutions but only suggestions which many of us have heard (or seen) before? How many times will curators fall back on the fantastical narratives and imaginative references of Lewis Carroll as metaphor for the overlapping spheres of art and life before such literary connotations no longer hold merit? The Snark is found—let’s move on. 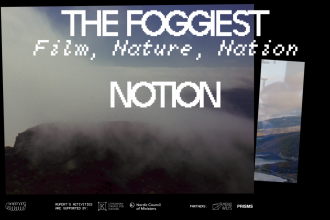 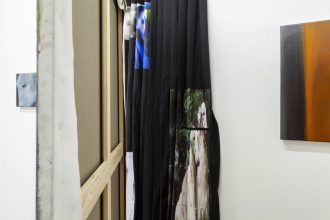 2022 09 30
Panel discussion ‘The Baltic Way. On collaborations and specifics of Baltic Art Scene’ at EKKM