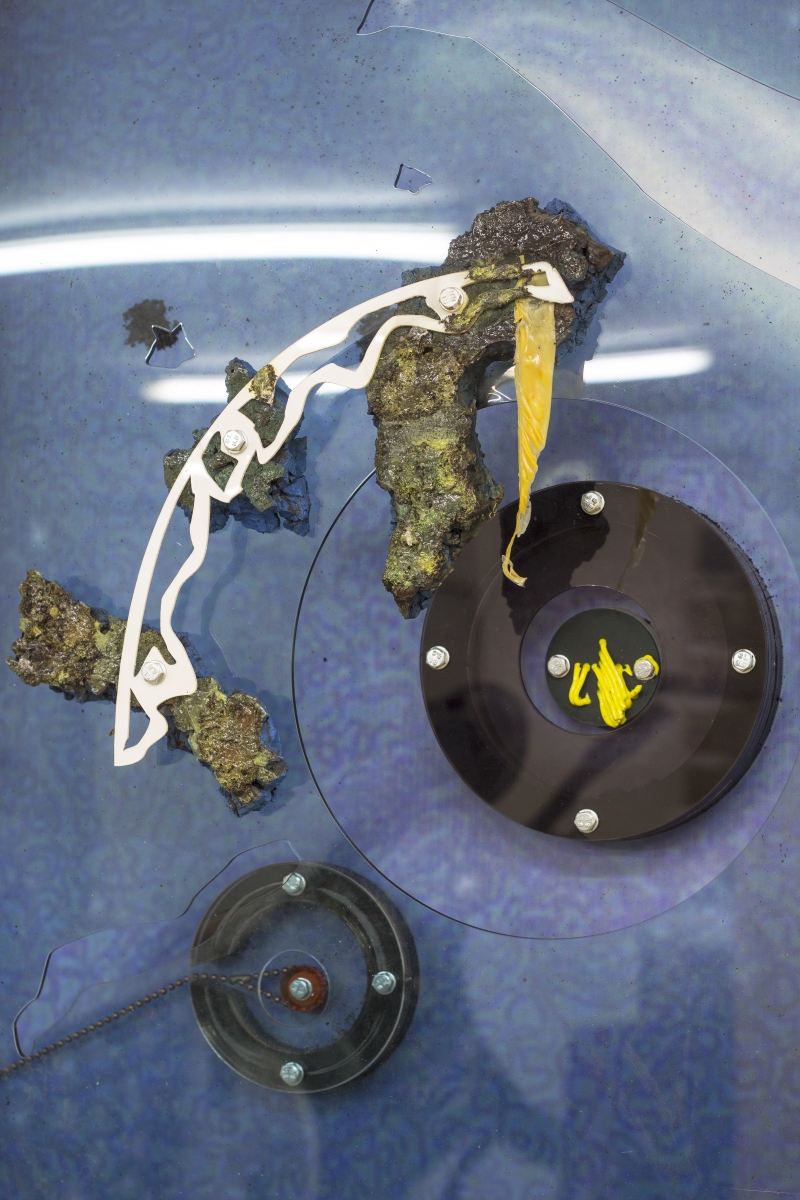 Jakub Choma is a Slovak artist currently living and working in Prague, a capital city that has become a European breeding ground for distinctive aesthetics, rethinking post humanist futures, expanding to the visual arts and the music scene. The artist has been active mostly on the Czech and Hungarian art scenes, as well as showing in other European countries in the last few years. ‘Resilience’ is Choma’s first solo show in the Baltics; not his first appearance, though, if one counts a group show at 427 in Riga in Latvia last year.

At Editorial, Choma has created a totalising, globalising, melting chaos, as a distillation of the techno-capitalist world. The exhibition shows a variety of colourful abstract pieces recalling engines, billboards and human-size microchips. Objects are assembled as constructions of cut-out plastic sheets, wood, pressed soil, chains, prints and two small screens reciprocating the devices hidden inside the pieces; and with debris seemingly just scattered around on the floor. All this manifests as mutations of an alternative reality, as something pervading to the present from the dystopian utopian future (to borrow the term from Franco ‘Bifo’ Berardi).

Kubrick’s Dr Strangelove satirised the theoretical physicist Edward Teller, who was said to have ‘supplied the nearest thing to a Quick Technological Fix to the problem of war … The Hydrogen Bomb’. Technological solutionism is still being optimistically spread by some; especially through data giants such as Google and Facebook, stacking their techno-capital on the promise to fix everything, even if no one asks. This has become the paradigm of our times, implementing counter-technologies against the advanced technologies that brought the Earth its environmental, social, economic ills.

Seeing how well it works, it is no wonder that techno-optimism has become exhausted already. The exhibition seems to suggest the same, reversing the power from the human to the non-human. In this paradigm, the human is seen to be losing its economic value, and, according to techno-capitalist logic, may be dragged out of the ecosystem.

Berardi, calling out the trans-humanist utopia as a Cartesian reproduction, recently stated that ‘the subjection of technology to capitalist competition has paradoxically paved the way for the comeback of Nature: the principle of natural selection. The philosophical core of Darwinist science has broken the restraints and shelters built by the autonomy of ethico-political action—restraints that constituted the legacy of humanism.’[1]

Mechanical monkeys having a post-digital romance, reproducing the social conventions of a species facing extinction: the narrative of Choma’s techno-dream of ‘Resilience’ written by Natalya Serkova in the exhibition text is enticingly descriptive, and, at this point, hits close to home.

In Choma’s narrative, the human is the one with dispersed parts in an unnatural environment, discarded material with its function depleted. How did it get here? Techno-systems are not ecosystems, current technological mantras suggest. A system established to support one species can barely qualify as an interconnected exchange with eco-quality: in the techno-systems, one species has to deteriorate to let others thrive and indulge in systematic gains. Choma’s entities assemblaged as resin-coated, soil-infused plastic residue with integrated technological devices to be subsumed, denotes human activity crushed by itself as a useless by-product.

The words PERMANENCE and MAINTENANCE are displayed on screens. The seeding of text into his objects seems to be part of a recurrent construction in Choma’s body of work, laying out quite bold suggestions into the surrounding meta-narratives (such as THINK OF YOURSELF AS A PIECE OF EQUIPMENT, IF YOU LIKE, at the exhibition ‘Stepping on a Lego’, 2018). For Berardi, permanence was a factor of a dispositif, a technological device, a machine to produce a generative process not unlike the television; a creator of constant reaction and of mutative reality.

This mutative reality of networked objects in Choma’s ‘Resilience’ allows a glimpse into the preemptive future, one that has already been executed. The permanence is haunting, the maintenance of the new techno-systems is up to who is left behind. Clearly, that won’t be us.

Photography: Ugnius Gelguda; all images copyright and courtesy of the artist and Editorial, Vilnius 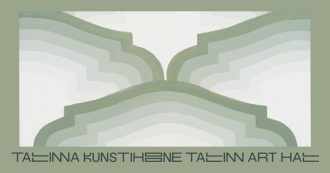 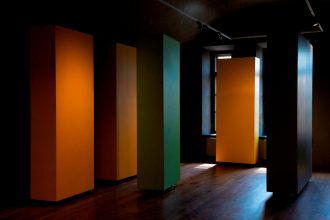