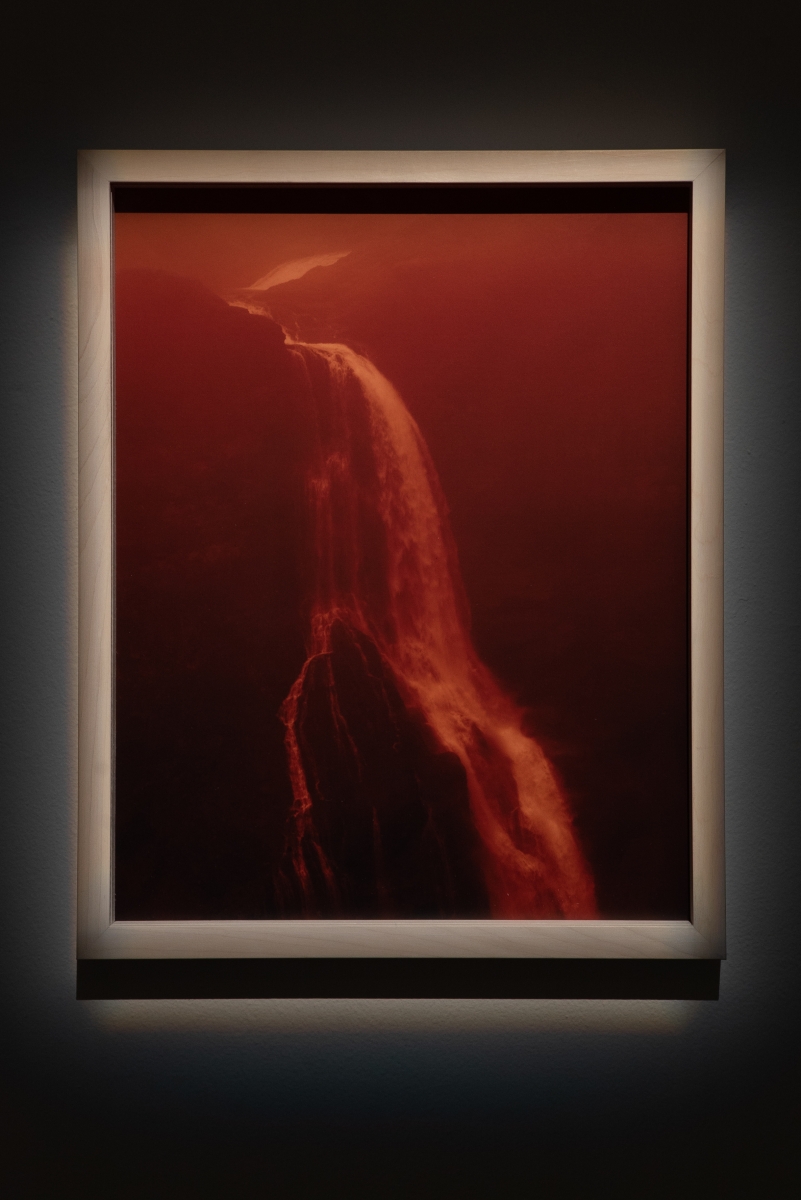 ‘I do not know what shadowy oils anoint our idea of our body. Our weariness is the mere shadow of a weariness. It comes to us from far away, like our idea of having a life … ’

What first hits the eye when you enter Geistė Marija Kinčinaitytė’s ‘smooth space, pleated’ at the Vartai Gallery in Vilnius is that the artist crafts meticulously the integral atmosphere of the display. It entraps you like your own fears and loves, shame and longing. Kinčinaitytė’s work seems to be most at home precisely in this chamber solo show genre, which gives the convenience of terraforming coherent sensual landscapes of peculiar chromatic and sonic palettes. In the show, the landscape extends over two of the gallery’s halls, one of which contains 14 neatly lit photographic exposures emerging from the dark, and the other a video essay entitled ‘The Pool’ (2020), made in collaboration with the experimental composers Simon Allen, Jan Hendrickse and Sandro Mussida, and the writer Elaine Tam, who is also the curator of the whole exhibition.

Sustaining the paradox between the show’s title and the narrow dark rooms, Kinčinaitytė plays with categories of close and distant, familiar and foreign. The themes of the (foreign) body and alienation dominate this exhibition and the artist’s most recent research. Even though the parallel with the body as a landscape (and vice versa) may seem trite and self-evident, Kinčinaitytė wraps it in her distinctive aesthetic, awash with angst and the uncanny. Motifs migrating from show to show demonstrate the artist’s consistency and sensitivity to visual and thematic half-tones. We notice how each of the exhibitions begins to flirt with the preceding one, images comment on other images, and the entire oeuvre weaves a continuous text, which could be classified according to Roland Barthes’ typology as jouissance, uncomfortable and disturbing dizziness, a suspended release of pleasure. Kinčinaitytė’s stories are exactly that: elemental, levitating between eros and thanatos, pleated over and over again.

Pleats, posterotics and neon red come here from her show ‘The Eyes Are Most Sensitive to Red’, held at the Sodų 4 project space in Vilnius a few years ago. Meanwhile, the Martian landscape’s submission to the human gaze, which Kinčinaitytė analysed in the project ‘You Belong to Me’, is reversed in the current exhibition. This time, the artist observes the Earth and the human with a nonhuman Other’s gaze. The intimacy and communication that are the object of her ongoing research noticeably acquire another scale and distance here, evolving into a desire of a totally different kind. The bodies in the photographs become integral folds of the landscape, visually concurring with the clotted waterfalls or withered volcanic peaks. The artist directs our gaze in such a way that the images before our eyes look like vaguely reminiscent yet unrecognisable postcards of a deserted Earth and abandoned bodies, inclusions of terrestrial memory. The longer you look, the more poignant and wistful they become. This odd feeling of longing for home while being at home is known by the term solastalgia. A combination of the Latin word sōlācium (comfort) and the Greek root -algia (pain), the neologism was coined in 2005 by the philosopher Glenn Albrecht. Solastalgia describes the emotional discomfort caused by the changing environment, particularly the shifts triggered by global climate change, which disturb the sense of familiarity with a place. Making ‘home’ the surface of the Earth and our own bodies, Kinčinaitytė induces this feeling through subtle gestures: not by depicting an altered environment, but by manipulating our position as viewers, changing us, and attempting to persuade us into being and seeing as the Other. The artist’s exhibition shows that images of devastated surfaces are not necessary to convey a sense of extinction, and that ‘a piece of landscape that looks beautiful can become the opposite of beauty,’ to quote the American filmmaker James Benning.

The notion of solastalgia could frame the entire atmosphere of ‘smooth space, pleated’, but it manifests itself in an even different way in the video essay ‘The Pool’. This unfolds a very obsessive and compulsive erotic narrative, woven from the static landscapes of the Canary Islands, the ocean licking the shore, and hunchbacked coastal cliffs. As if searching for signs of life, the artist explores both the ‘outside’ and the ‘inside’ of the landscape. The accompanying text is an unanswered sophisticated poetic letter to sublime landscapes. They care about a relationship with us as much as they do about a volcanic eruption or a flood. The artist transposes on to us nature’s indifference and foreignness to humans, asking where this feeling begins and ends when we consider ourselves. Where do our human feelings and bodies begin and end? Does human necessarily mean terrestrial, and vice versa?

Bringing alienation to the foreground in the video essay, Kinčinaitytė reminds us of the relevance of this relation. Exactly, relation. Alienation is said to be a modern malaise, caused by secularisation, urbanisation, radical individualisation, technology, and even helplessness in the face of major climate change. Yet first and foremost, it is a cooled relation with the environment and oneself. Not an absence of relation, but a relation of relationlessness, as the philosopher Rahel Jaeggi puts it. Seeking to illustrate it in our global anthropocentric relation with the Earth’s landscapes, the artist evokes much smaller-scale relations of relationlessness, all the Others and otherness to which we still often turn a blind eye, and perhaps do not long for at all.