Photo reportage from the exhibition 'Transparency Register' by Sten Eltermaa at the Dragon gallery, Tallinn 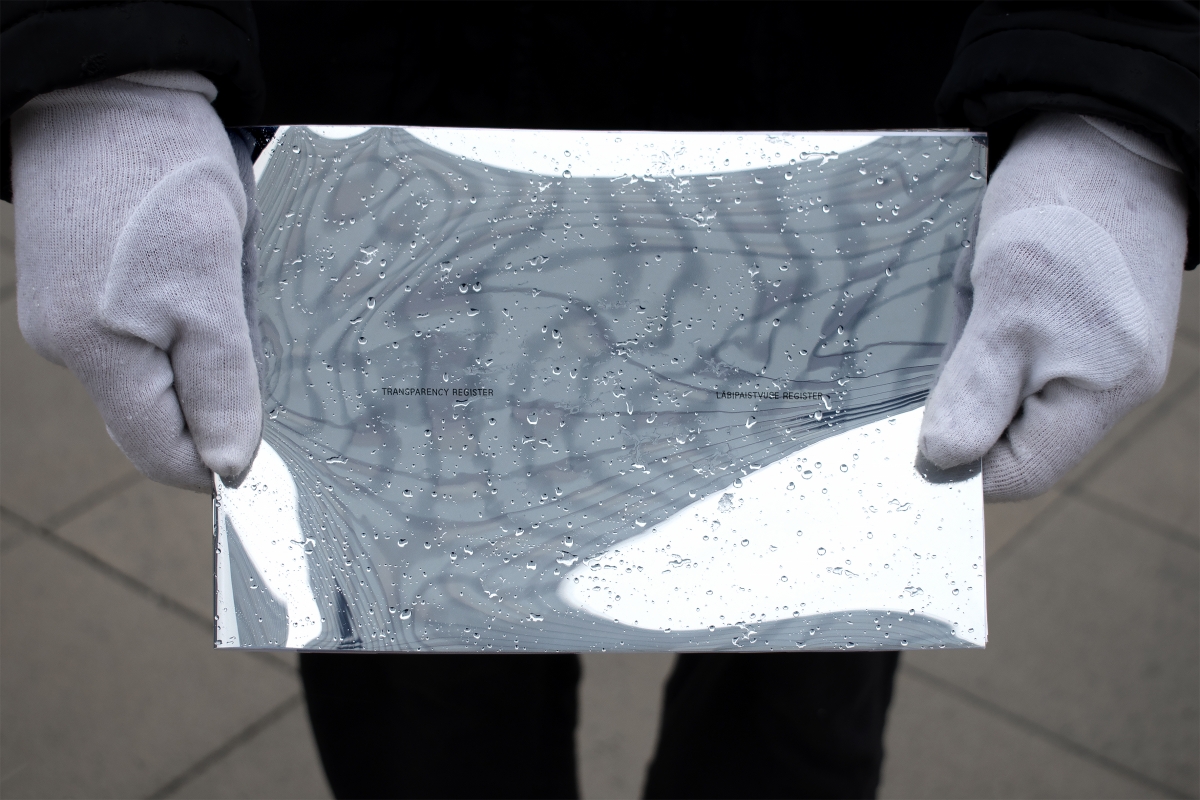 ‘Transparency Register’ is a project based on image and language, making the windows and facades of governmental authorities visible to the audience. The project involves various layers: reflective-transparent window film, photographs on the wall, photographs on the showcase table and publication of the artist’s research that contains text in the style of academic research and photographs.

The title of the work also refers to the US-inspired database introduced in 2011 to shine public light on the communication between lobbyists and the representatives of EU institutions. The database’s main objective is to create trust in regard to institutions and the policies the institutions or their representatives are pursuing, but also oversight to make it impossible to do the bidding of murky and corrupt interests.

In general, parallels can be drawn in the context of this work with the architecture used in modern and postmodern institutions of power and governance, and the rhetoric that liberals have used or currently use – specific, technical, rational, inaccessible and often conducive to apathy and mistrust: a “cold” selection of material (concrete and stone, glass and steel) and intricate engineered load-bearing structures. The buildings are often homogenous and based on repetition and their facades are made up of regular vertical and horizontal lines – so that they are reminiscent of a crossword or Sudoku. There is the sense that the interiors might be the same way – a monotonous, Kafkaesque world that is easy to get lost in. I would argue that architecture of this type is of a rational type and also reflects the rational rhetoric characteristic of liberal force.

Present exhibition displays photographic series taken in Brussels and Tallinn in 2016-2019, depicting institutions of power and governance, whereas the focus being on the windows of these buildings. Many landmark buildings should be recognizable to the viewer on these photographs, for example, the seats of the European Parliament, the European Commission, the Council of the European Union, Eurojust, Europol, the International Criminal Court and the International Criminal Tribunal for the Former Yugoslavia. In addition, the sites include several local institutions in The Hague, such as the Supreme Court of the Netherlands, the Hoftoren, the headquarters of the Dutch national police force, The Hague City Hall and a number of ministry and embassy buildings. The buildings photographed in Brussels also include several EU buildings in the European Quarter as well as embassies and local government institutions. The selection in Tallinn includes the “Superministry” building, the IT Agency, the Ministry of Foreign Affairs, the Harju County Court and the Tallinn City Government.

Sten Eltermaa (1986) is an artist-writer who is intrigued by the environment, power and borderline conditions. Eltermaa has studied philosophy in Tartu and Tallinn University, photography in Pallas University of Applied Sciences and at the Estonian Art Academy, having complemented his education at Escola Superior Artistica do Porto, Royal College of Art The Hague and LUCA School of Arts.