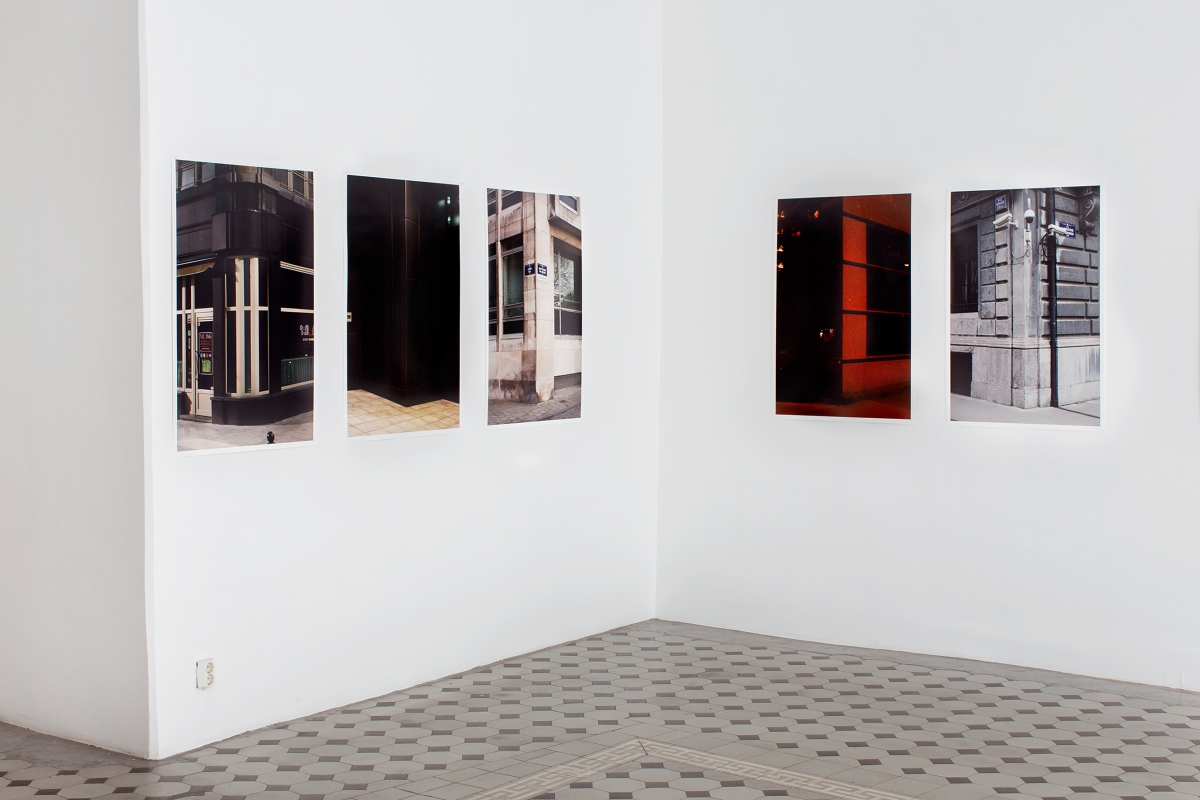 When looking for a new bottle of perfume, a smell to wear, we are encountering people whose work-identity is to consult us in the invisible detail of our own identity. The sales person has to have a heightened sensitivity to guide us in the making of this deeply personal choice. The series of portraits is taken of perfume sellers at the everyday positions, all of the four with their own personalities, in the process of guiding us in our own self-making.

“Unavailable Memory (The Corners of Brussels)’’

The building corner motif itself is not particularly rare in conceptual and postconceptual photography. As the artist indicated to me, separate exhibitions have been dedicated to the subject. Yet Tarvo Hanno Varres visits the motif of corners already for the second time – his earlier series depicted the street corners of his native Tallinn, with a few indoor corners slipped in for some breathing room. The two series seemed to be linked by the existential question about people’s everyday choices, which on a broader level can be expanded into being human and being together in general. The twenty-two massive photos in the series have mostly been shot in twilight. Through the architecture unified by the camera’s perspective, the ‘breaking points’ of the empty night-time city obviously present us with questions about the history, trilingual identity, everyday usage of the city and its status as a so-called European capital, embodied by the city’s physical substance. However, as Gaston Bachelard has written, a house that has been experienced is never an inert box, instead it takes on a psychology almost immediately, becoming one of the most important psychoanalytic constructions, one of the most primal models of the soul, where the attic corresponds to the superego, the living quarters to the ego and the cellar, of course, to the subconscious. The collection of corners shot by a flaneur wandering around aimlessly in the city at night is a mental landscape, an imagined crowd, which poses questions about the identity of not only itself but also the viewer, while retaining ambivalence, which Varres considers an essential part of any work of art. Dealing with the landscape of a city yet unknown to him, the artist uses the work’s title to introduce the motif of the return of memories, of impossible or hindered memory work. It is possible that this distant or imagined memory is not the artist’s alone but a part of a process that connects him to the viewers. – Hanno Soans

Tarvo Varres (b. 1970, in Tallinn) is an artist working in photography, video and installations, who started exhibiting in 1991 with the exhibition Guide to Intronomadism. He has received several awards, is nominated for the Köler Prize 2018, his works are in the contemporary art collection of the Art Museum of Estonia, and he has been a guest tutor at the Estonian Academy of Art since 1996.