Published in News from Latvia 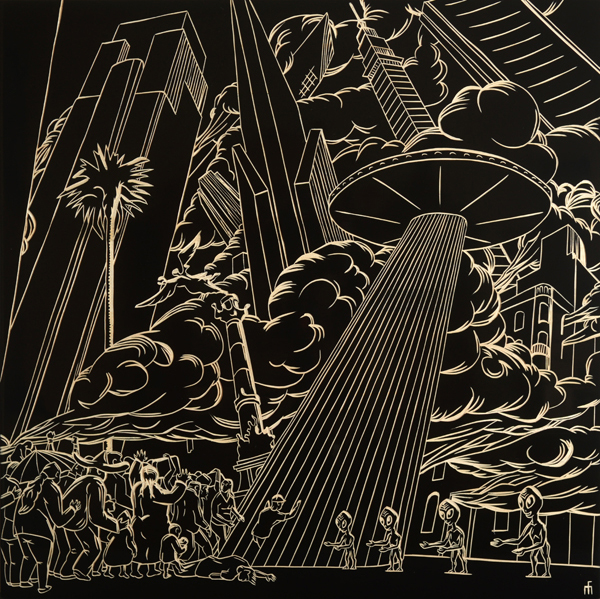 Having received the highest score from the jury, the winner of the fourth Purvītis Prize is artist Miķelis Fišers.

Tonight at an official ceremony Māra Lāce, Director of the Latvian National Art Museum, and Jānis Zuzāns, Chairman of the Board of Alfor, Ltd., which is the patron of the museum, announced, on behalf of the jury, the name of the winner of the Purvītis Prize 2015. Together with the Prize, the artist also receives a money award of EUR 28 500 (before taxes).

The winner of the fourth Purvītis Prize was determined by an international jury of nine members. The decision on the winner of the Purvītis Prize 2015 was taken by the jury in a closed sitting following an extensive discussion lasting 3 hours during which the jury assessed the exhibition pieces by all nominees: Kaspars Teodors Brambergs, Miķelis Fišers, Gints Gabrāns, Kristaps Ģelzis and Ģirts Bišs, Ginters Krumholcs, Ģirts Muižnieks, Henrijs Preiss and Artūrs Riņķis.

“The jury’s decision was taken by three rounds of voting, and I have to say that in the end the winner was chosen by a majority of one vote. Miķelis Fišers fascinates with his ability to create something new every time, while still staying true to his interpretation and certainty of the order of the world and universe. In comparison to his previous work, here we see a slightly different form of expression in the technique and size of the work. The exhibition piece is a comic carved out of wood entitled Disgrace (Netaisnība); it is of perfect quality, an ironic, playful story featuring clear references and reactions to current socio-political events,” Māra Lāce, Director of the Latvian National Art Museum and chairperson of the jury, explains.

Miķelis Fišers was nominated for the Purvītis Prize 2015 and included in the shortlist compiled by experts for his personal exhibition Disgrace, which took place at the Pauls Stradiņš Museum of the History of Medicine (28.11.2014 – 18.01.2015).

Miķelis Fišers was also nominated for the previous Purvītis Prize in 2013.

The exhibition of the nominees for the Purvītis Prize 2015 will be open to the public until 12 April at the Arsenāls Exhibition Hall of the Latvian National Art Museum. The exhibition is curated by Daiga Rudzāte and the designer is Mārtiņš Vizbulis.

The organisers of the Purvītis Prize are continuing the established traditions and invite all visitors of the exhibition to express their opinion on the works of the eight finalists of the Purvītis Prize 2015 by filling out a survey and voting for their favourite piece at the Arsenāls Exhibition Hall. At the end of the exhibition the results of the public vote will be revealed and two voters will win the chance to visit exhibitions organised by the Latvian National Art Museum for one year free of charge.

In order to ensure continuous evaluation of creative performance in visual arts in Latvia, the expert group of the fifth Purvītis Prize has already begun its work which will last throughout 2015 and 2016 regularly naming nominees for the award. The members of the expert working group are: Elita Ansone, Head of Collections (second half of the 20th century – 21st century) and Scientific Research Department Arsenāls, Inga Šteimane, art scholar and curator, Vilnis Vējš, art critic, Jānis Taurenis, philospher, associate professor at the Art Academy of Latvia, Aiga Dzalbe, art scholar, Daina Auziņa, art scholar and Collection Manager at the Latvian National Art Museum, and Ieva Astahovska, lecturer, curator and art critic.

The Purvītis Prize was founded in January 2008 with the aim to gather regular and systematic information on the current visual arts scene in Latvia, to promote the development of new projects and original ideas and to, acknowledge the finest achievements in Latvian professional visual art and promote the success of Latvian artists both in Latvia and abroad. The Prize is awarded every two years to an artist or group of artists who represent Latvian art with an outstanding work closely tied to the processes of the time in which there is a link to contemporary life, spiritual ideals and absolute values. The Prize goes to the artist who has been rated the highest by experts and a specially formed panel of judges. The prize money is EUR 28 500 (including taxes). It is the largest prize in visual arts in Latvia.

The winner of the third Purvītis Prize in 2013 was Andris Eglītis for personal exhibition Soil works (Zemes darbi).

About the sponsor: The Purvītis Prize is sponsored by Alfor, Ltd, whose Chairman of the Board Jānis Zuzāns holds great interest in contemporary art, which has not gone unrecognised as he has become a member of the Russia and Eastern Europe Acquisitions Committee of the Tate Modern (United Kingdom). The Acquisitions Committee follows trends and developments in contemporary art and suggests pieces for acquisition that best characterise the historical narrative of the time. It must be noted that new members are accepted into the committee only upon recommendation.

The Purvītis Prize in visual arts is organised by the Latvian National Art Museum in cooperation with the patron of the museum Alfor, Ltd. The project is implemented also with input from culture project agency INDIE and PR agency P.R.A.E. Public Relations.