Published in Events in Latvia News 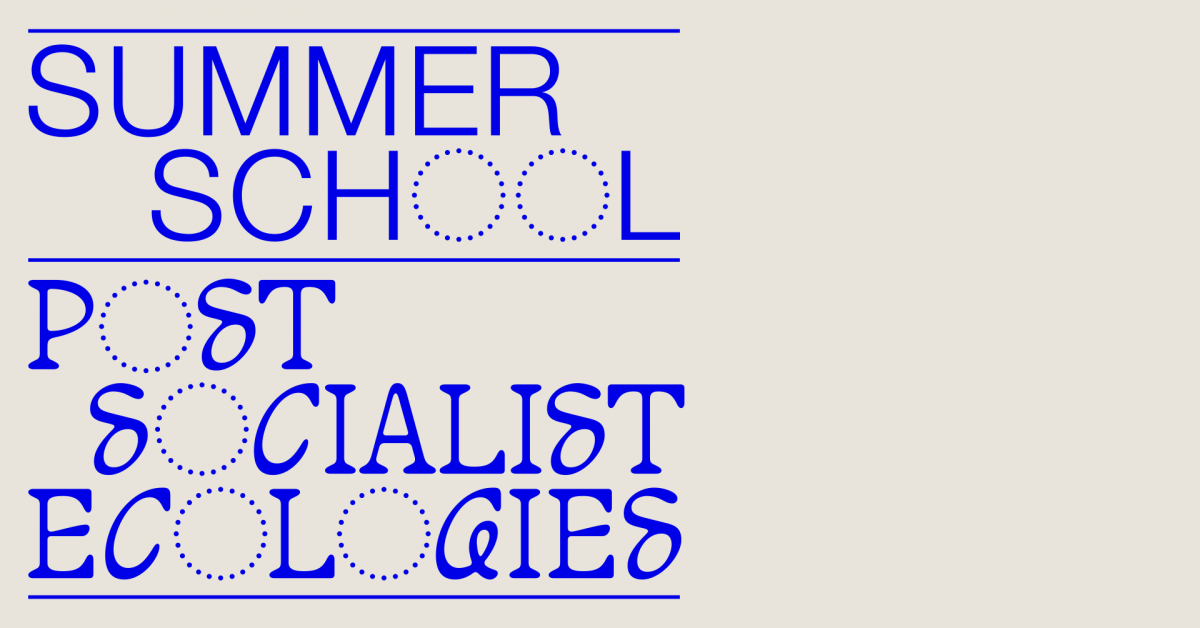 From August 12 to 17, the Latvian Centre for Contemporary Art is holding the annual summer school “Ecologies of Postsocialism” in Valmiera to bring together young artists, cultural researchers and curators from the Baltics and other European countries. The program of the summer school will address ecological issues through the lens of our region’s present and recent heritage, linking them to global developments and the processes of decolonisation. The LCCA is inviting all interested guests to take part in the events of the public program, which will be held during the summer school at the Kurtuve art space in Valmiera.

How can revisiting the past help to understand and work with contemporary political and environmental crises? The Summer School program will address ecological issues through the lens of the Baltic region’s present and recent heritage, linking the local environmental history to global processes and the decolonisation in the post-Socialist realm. The event seeks to develop ideas and practices for alternative ecologies, asking how we can create new approaches to post-Socialists environments and communities.

17:30–19:00      Talk and workshop by Linda Kaljundi, Cultural Imaginaries and the Rise (and Fall?) of the Estonian Oil Shale Industry

10:00–12:00      Talk and workshop by Eglė Rindzevičiūtė, Futures, Wasted? The Politics of Inheritance and Destruction in the Urban Space

The Latvian Centre for Contemporary Art Summer School is organised in collaboration with municipality of Valmiera, Art Academy of Latvia, the Estonian Academy of Arts and the Kumu Art Museum (Tallinn). Its program – seminars, workshops and creative sessions – will focus on the most relevant contexts of contemporary culture and ecologies through critical and posthumanist perspectives, exploring the complex relations between the non-human and human, the natural and the technological in the Baltics and Eastern Europe.

This presentation focuses on the connections between the infamous Nord Stream gas pipeline and Putin’s war in Ukraine. Launched in 2011, this project made Germany de facto complicit in the emergence of the Russian “fossil fascist” regime. The profits from the European consumption of gas were funding Russia’s military machine, while reliance on cheap Russian gas had delayed the energy transition from fossils to renewables, worsening the climate emergency. By joining the Nord Stream project, Germany had signaled—perhaps, unwittingly—that all the talk about Ukraine’s role in the European project is nothing but hollow rhetoric.

In the European reality that emerged after the collapse of the Soviet Union, the newly independent Ukraine has been ascribed, shamefully, with only one real geopolitical role: that of a transit zone enabling the deliveries of Russian fossil fuels to their European consumers via the Soviet-era oil and gas pipelines buried in Ukrainian land. The major rationale behind the Nord Stream project was to render this gas transit zone obsolete; the moment Germany agreed to strip Ukraine of its transit potency, the stage for Russia’s 2022 invasion was set. This talk will include a screening of Nord Stream Studies, a video work-in-progress based on footage sourced from the website of Nord Stream AG.

In the last few years ethnographic museums in Europe have started to return heritage to formerly colonized or occupied countries. In the debate on the return of colonial loot to the communities they were taken from, the question becomes what’s next for the museums that have housed this heritage expropriated under duress. In 2019, Quinsy Gario was invited to take part in an exhibition at the World Museum Rotterdam and chose to subversively tackle this question. The museum itself is a part of the Dutch National Museum of World Cultures, which houses the ethnographic collections from the Dutch state and takes care of collections of the city of Rotterdam and a fraternal Catholic order. In recent years, the Netherlands has returned human remains to Ghana and cultural heritage to Indonesia. With these questions, the material legacy of colonial violence is out in the open; however, the environmental impact of colonialism has not enjoyed the same recognition. Also, thinking about climate justice, the link with a continued material legacy of colonial violence and extraction seems on a second tier.

In the work that Gario proposed for the World Museum Rotterdam he sought to foreground these questions and highlight absences in the collection of the National Museum of World Cultures when it pertained to the islands that share Dutch occupation and colonization. The Netherlands went to the Caribbean in search of salt, but salt from the Caribbean is missing from the colonial collections. Together with the artist Glenda Martinus, his mother, they set out to collect that curiously missing salt and to question the future of collecting, collections, and environmental justice.

Cultural Imaginaries and the Rise (and Fall?) of the Estonian Oil Shale Industry

This talk will focus on the role of cultural imaginaries—visual culture in particular—in the history of the Estonian oil shale industry in the twentieth and twenty-first centuries. Emerging relatively late and developing in the borderland between the east and west, the Estonian oil shale industry has been shaped by diverse traditions in a political, technological, and socio-cultural sense. As such, it offers a fine example of the hybrid and transnational nature of industrial modernity. I will look at the role of culture and visual culture in legitimizing and branding the industry during the authoritarian 1930s; discuss the change and continuity between the interwar period nationalist and Soviet representations of oil shale; and thereafter focus on the emergence of critical perspectives in the 1970s and the role of images during the perestroika-period environmental movement in the 1980s. Even though my talk relies heavily on historical materials, it is nevertheless framed by the current conflicts around the oil shale industry in Estonia, arguing that in order to orientate and participate in these often very heated debates, one also needs to know the history and legacy of the earlier cultural imaginaries around the industry.

Futures, Wasted? The Politics of Inheritance and Destruction in the Urban Space

This talk employs the intersection between heritage studies, critical waste research, and urban studies to rethink the post-socialist and post-Cold War ecologies. The twentieth century has left a complex material legacy that present and current generations will live with. A big part of this legacy is toxic industrial waste as well as urban infrastructures that were built to serve industries that are no more. Both waste and infrastructures are not mere utilities, but charged with cultural and political symbolism. They are also theaters for the evolution of the social and forums where new forms of politics are developed.

Russia’s invasion of Ukraine made quiet and invisible infrastructures visible in the most painful and traumatic way. The Azovstal steel works became a battlefield and cities were reduced to rubble, while shelling exposed both the vital importance of infrastructure and its “made” character.

Ruderal Agents, or The Agency of Feral Things

During this talk and workshop, we will talk about plants and the roles they play in historical and economic processes. We will examine the history of ruderal species of plants—those growing on sites formerly occupied by factories and mines closed down from the 1990s, and those planted today on former industrial zones—and think about whether they can point us towards future solutions for our local communities. Can plants provide us with a lens through which we could see the problems and challenges faced by communities on the edge of a global energy transformation? Can we consider ruderal species growing on disused, ex-industrial land and abandoned fields as tireless, precarious workers laboring for the renewal of Earth’s ecosystems?

In this presentation I reflect on my collected (audio-visual) impressions of the industrial mining landscapes in the Ida-Virumaa region of northeast Estonia. What began as a curious investigation of the other side of “Green Estonia” in 2009, became a long-term active process into artistic “ways of knowing” and “ways of representing” large-scale, complex cultural and environmental conditions. Some of this material found its way into the installation Geofractions, which was part of the Life in Decline exhibition, held from 17 June until 3 October 2021 at the Estonia Mining Museum in Kohtla-Nõmme (curated by Francisco Martínez). Currently, my sound recording archive is being worked into a soundscape composition project, also entitled Geofractions, that will be released later this year. Additionally, I would like to show excerpts from material collected during two fieldwork trips into these mines and mining regions (organized by the Estonian National Museum).