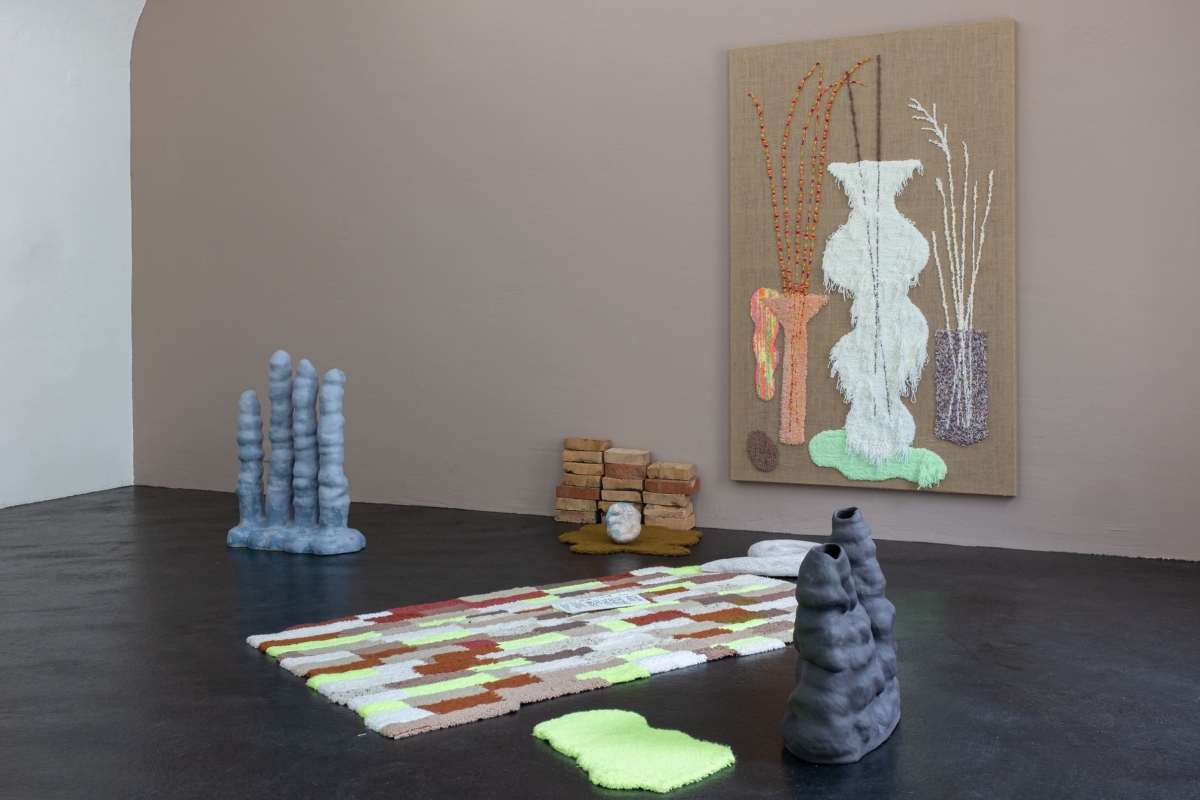 On the 26th of January at 6 PM, the opening of Laura Põld’s solo exhibition Translating and Co-labouring will be held at the Gallery (AV17).

Laura Põld works in the fields of interdisciplinary crafts and sculpture-based practice. The artist’s work continuously explores the environmental history, fundamental human and more-than-human skills and needs, including community, safety and shelter. A great emphasis in Põld’s work falls on her choice of materials and their historical and political context, which she employs implementing traditional crafts and building techniques in ceramics and tufting, which interest her as the preservation of stories, memory and skills. Her often-large-scale constructions or installations either take over or interfere with the exhibition venue and/or its context.

In the exhibition Translating and Co-labouring, Laura Põld will present her latest works – handmade pictorial carpets, textile installations and ceramic objects. The exhibition is a record of Põld’s recent projects that deal with the processes of mundane labour and handicraft, where the natural character of the matter acts and intra-acts with the maker. In this exhibition, the artist will reflect on the idea of the entanglement of people, animals, fibres and objects in the process of working with raw materials such as clay, wool, or plant fibre. It is perceived not only through joint labour, but also through the old tradition of telling stories while working, recording and perpetuation of them in songs, writings, and also in works of art. In the silent dialogue and translating between the materials and the working hands, both freely formed and borrowed patterns from the Estonian folklore are allowed into the image-making and form-creating. The exhibition invites the viewers to immerse themselves and find this connection between raw materials, labour, and storytelling.

Laura Põld (b. 1984) studied ceramics at the Estonian Academy of Arts (BA), painting at the University of Tartu (MA) and sculptural conceptions and ceramics at the University of Art and Design Linz (MA). Laura Põld has been awarded a number of prizes and scholarships such as the annual prize of The Cultural Endowment of Estonia (2014), Köler Prize Grand Prix (2016), the grand prize of The Cultural Endowment of Estonia (2018), the ISCP New York studio grant (2019) and the Claus Michaletz Preis (2021). The artist is currently based in Tallinn and Vienna.

Laura Põld‘s exhibition Translating And Co-laboring at the Gallery (AV17) will be open until 2nd of March.