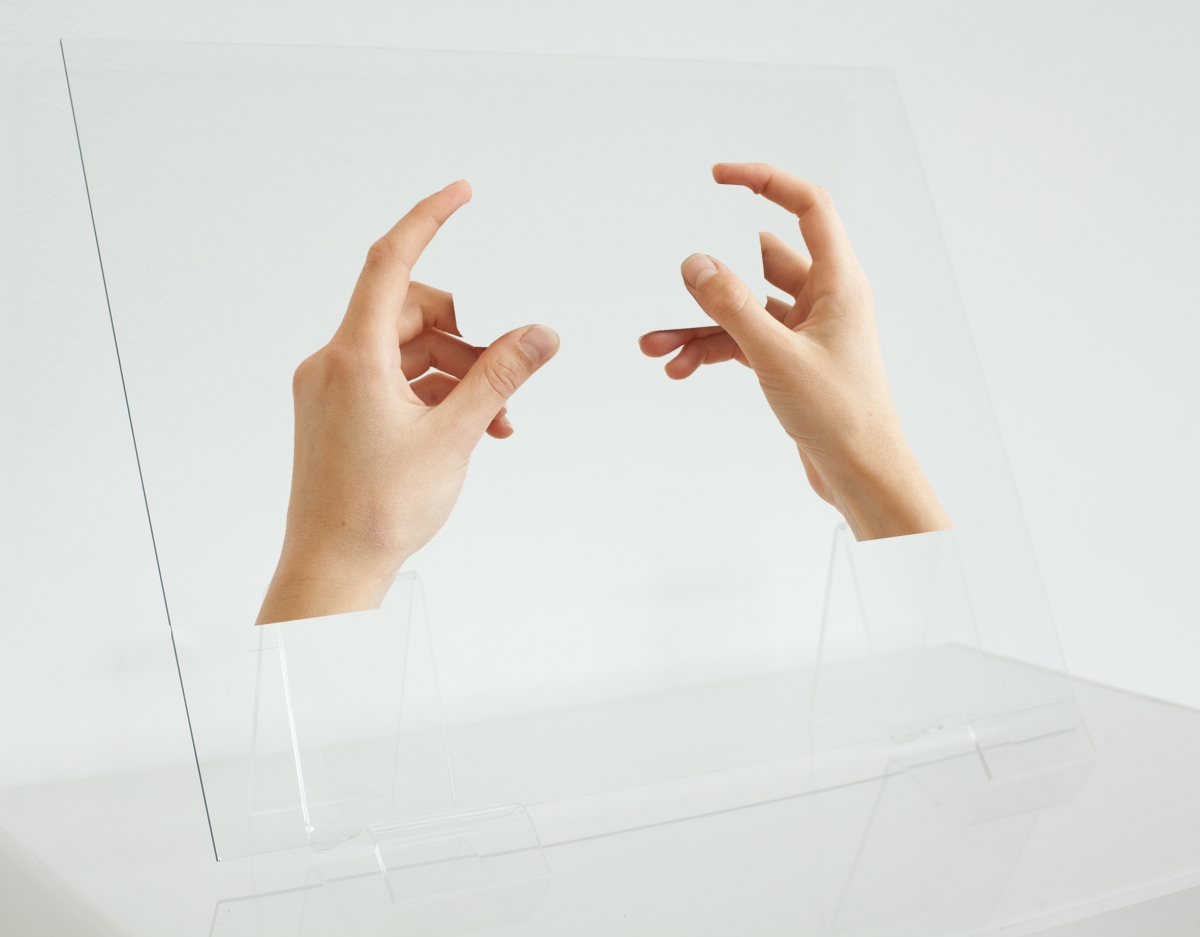 Kristina Õllek, Distorted Hands, 2017. UV print on transparent plexiglass, two transparent display holders, plexiglass plinth. Courtesy of the artist
On 2 June, Kogo Gallery will open a group exhibition My Bitter Sweet Frankenstein Body at Titanik Gallery, based in Turku, Finland. The exhibition presents the artworks of ten artists from the Baltics. The show is a result of a collaboration between the two galleries exchanging their exhibition projects this year.

My Bitter Sweet Frankenstein Body is dedicated to the complex relationships between humans and their colonised, globalised and digitised bodies and all the hybrids and errors in between. Each of these bodily forms promises a certain exit and relief which never truly fulfils.
One of the starting points of the exhibition is novelist Mary Shelley’s most celebrated gothic novel Frankenstein or The Modern Prometheus (1818), in which she told the story of a doctor who pushed the limits of man as creator and gave birth to a child of progress albeit a monster.
In the exhibition, the role of Frankenstein is taken up by artists and the curator, symbolically representing a contemporary society that constantly tries to form our bodies according to some normative frame. Each of the selected artworks represents some part of the human body that is displayed in the gallery rooms for viewing by the curious visitor. The reasoning each of the artists has for using certain elements of body parts as forms or images for their work differs from the metaphorical representation of emotions and beliefs, forms for creating a landscape, objects for talking about beauty or cultural identity, and platforms for talking about morality and censure or making a political stand. Each of the pieces is “stitched” together in one creature that is the exhibition itself representing both the Frankensteinian desires existing in contemporary society as well as the tradition of the curatorial exhibition making itself.

My Bitter Sweet Frankenstein Body, curated by Kogo Gallery’s curator Šelda Puķīte is the first exhibition that results from the collaboration between Kogo and Titanik and that is exchanged this year. In autumn, the collaboration will continue with a new exhibition that will open at Kogo Gallery, curated by Mirjami Schuppert, the director at Titanik Gallery.

Titanik Gallery is a contemporary art gallery in Turku, Finland, founded in 1988 by Finnish Artist’s Association Arte. Titanik is a noted platform for upcoming artists and unconventional art that besides exhibitions also runs an international artist residency programme, hosts concerts and performances.

Eike Eplik (b. 1982) is a sculptor and installation artist based in Tartu. She graduated from the Sculpture Department of Tartu Art College in 2007 and the Estonian Academy of Arts in 2010. She uses nature motifs to construct a narrative, utilises the gallery space from floor to ceiling, works with sculpting techniques from classic plaster casting to paper and wood assemblage and found objects. The processes in her art are partly subconscious and not always fully explainable.

Edith Karlson (b.1983) is a sculptor and installation artist based in Tallinn, where she is also a teacher at the Estonian Academy of Arts. She acquired her BA (2006) and MA (2008) degrees at the Installation and Sculpture department of the Estonian Academy of Arts. Karlson’s sculptures and installations resemble Medieval relics, as well as funky circus troupes and phantasmagoric nightmares, where the old and new worlds clash in one apocalyptic vision. The artist’s works have been described as dark fairy tales, as they tend to look like fun playrooms full of monstrous creatures. They all seem to be tools for creating allegories of strong human emotions and fears surfacing from the deep dark pit of the unconscious.

Kristina Õllek (b.1989) is a visual artist based in Tallinn. She graduated from the Estonian Academy of Arts (Fine Arts, Photography, BA 2013, MA 2016), and complemented her studies in Berlin at Kunsthochschule Berlin-Weissensee (2012) and in Rotterdam at Piet Zwart Institute (2016). Õllek works in the fields of photography, video and installation, with a focus on investigating representational processes, geological matter, aquatic ecology, and human-made environments. In her practice she explores situations where fact and fiction, synthetic and natural, copy and original intertwine with each other and become a hybrid object/matter with a new and reconsidered meaning.

Laura Põld (b.1984) is a visual artist based in Tallinn. She has studied ceramics at the Estonian Academy of Arts (BA 2007), painting at the University of Tartu (MA 2010) and sculptural conceptions and ceramics at the University of Art and Design Linz (2018 – 2021). Põld continuously explores fundamental human (and animal) needs, including community, safety and shelter. In her latest work, she focuses on her choice of materials and their historical context, implementing traditional handiwork and building techniques like (primitive) ceramics and embroidery, which interest her as a preservation of memory and experience.

Kristel Saan (b.1985) is a visual artist based in Tallinn. She acquired a Master’s Degree in Ceramic Design from the Estonian Academy of Arts (2015) and has also studied at Central Saint Martins University of Art and Design (2011) in London and at Emily Carr University of Art and Design (2013) in Vancouver. Saan works with large-scale installations, photography, video works, ceramics and textile pieces. The artist’s work often resembles diverse utopian areas where poetry, philosophical topics, and various unexpected organic and artificial materials intertwine, while one of the main aspects becomes the perception of object, material, and space.

Krišs Salmanis (b.1977) is a visual artist based in Riga. He studied in the Visual Communication Sub-Department at the Art Academy of Latvia (MA, 2003) and at the Academy of Media Arts in Cologne (2009–2010). Salmanis uses animation, video, photography and objects as well as his body in his art. His work can be perceived as a mental exercise, intellectual activity and wit as a twist of thought. Painstakingly elaborate, the works are thought out to the tiniest detail. They are often quite minimalist in terms of artistic expression and defined by their unexpected paradoxicality and intuitive quest for the truth combined with subtle irony and existential sadness.

Jaanus Samma (b.1982) is a visual artist based in Tallinn. He graduated from the Estonian Academy of Arts with a BA in graphic arts (2005) and an MA in fine arts (2009). His body of work includes photographs, installations and videos with topics that have been grounded in the study of urban space and the subjective experiences of it. Over the years his interests have moved towards gender studies, investigating the representation of male sexuality and ways of portraying this by artistic means. His fields of interest include history, ethnography and museology as well as the narratives used at the intersection of the three.

Līga Spunde (b. 1990) is a visual artist based in Riga. In 2016, she completed her postgraduate studies in the Department of Visual Communication at the Art Academy of Latvia. Spunde presents her works as multimedia installations, intertwining personal stories with deliberate fiction. The interpretations and use of recognisable characters serve as an extension of her personal experiences, tapping into universal truths. Usually, the content of the work determines the physical form of the conception, so a variety of media and materials are used in the installations.

Rūta Spelskytė (b.1985) as an artist based in Vilnius. She studied printmaking and sculpture at Vilnius Art Academy receiving bachelor (2008) and master degrees (2010). In 2019, she also received her doctoral degree from Vilnius Art Academy. Spelskytė is especially interested in misunderstandings and failures by humans, as well as the interrelations between science and the extro-science-fiction world. She works with rare specimens, the emission of light and pigments, imagining future alchemy, plants, animals, and senses that could be trained or found.

Sabīne Vernere (b.1990) is a painter based in Riga where she is heading the experimental Pilot art space of the Art Academy of Latvia. Since 2019 she holds a master’s degree from the Painting Department of the Faculty of Visual Arts at the Art Academy of Latvia. She has perfected her skills at the Academy of Fine Arts in Zagreb and the Royal Academy of Fine Arts in Antwerp. Vernere is an emerging Latvian painter, who has garnered acclaim for her bright and expressive Indian ink paintings. The artist has focused her investigative lens on bodily and sexual experiences that instead of becoming the key topics of the investigation, serve merely as an extension of the working language.