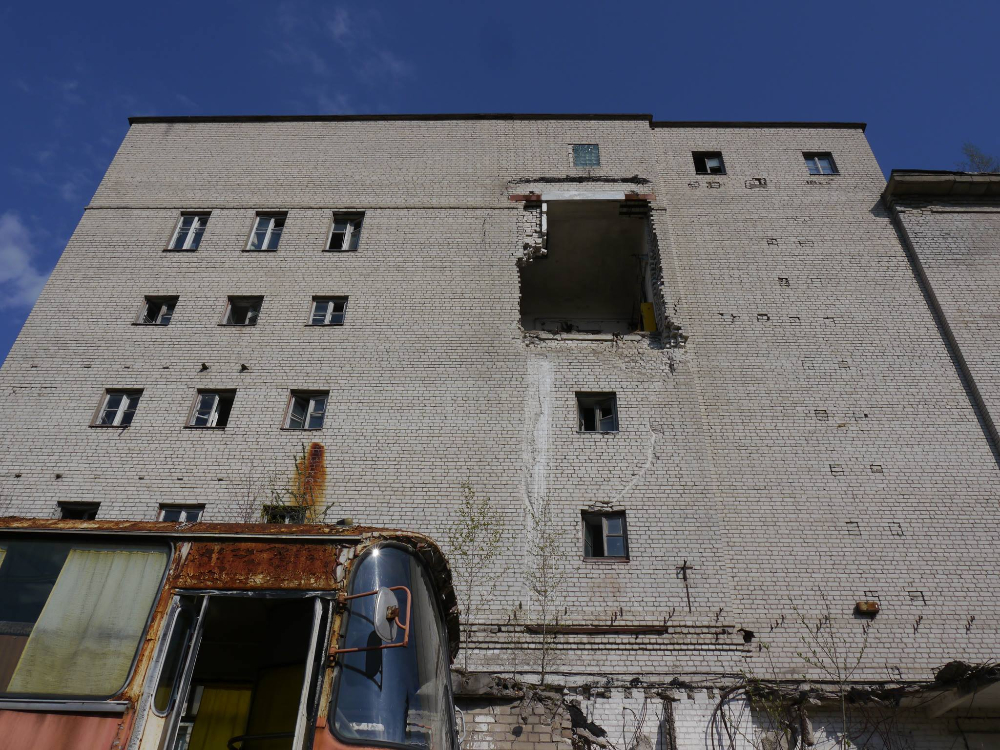 I guess, Eglė Grėbliauskaitė could offer her own subjective interpretations of her artwork that she decided to install in front of the entrance to the Vilnius Academy of Art—big rusty metal letters spell ‘KOMBINATAS’ (‘FACTORY’ from Lithuanian). I hope you agree that finding oneself inside a meat factory, even if it is a dysfunctional one, would be a rather macabre experience that would arouse some controversial thoughts, especially if one is opposed to meat eating and animal slaughter.

However in this case I am more interested in how a partly reconstructed and relocated content starts or ceases to function in different historical, micro-social, and micro-political contexts, perhaps even beyond the initial intentions of an artist herself. In addition to that, I will probably not digress from the original concept by saying that despite the specific contexts, Grėbliauskaitė’s ‘Kombinatas’ activates both personal and collective memory. I found those letters on the roof of a defunct meat factory at the end of Savanoriai street. Even though it is empty now, the factory is still imbued with the ten-year-old past. I could almost hear the roar of these cutting and mincing machines—from the outside one would not be able to tell whether they are still operative today… Once you enter the meat factory system, you can be sure that you will be processed properly… And you will leave in peaces…((From Eglė Grėbliauskaitė’s notes))

Stirring up the context of the Meat Factory((Established in 1940 in Naujoji Vilnia district of Vilnius, the Meat Factory belonged to the People’s Commissariat of Meat and Milk Industry of Lithuanian Soviet Socialist Republic (LSSR), then to The Ministry of the Products of Meat and Milk Industry ‘Litglavmiaso’, then to The Ministry of Meat and Milk Industry of LSSR, then to The Ministry of Meat and Milk Industry of LSSR, and to The Ministry of Refrigerator Industry Products. After the Peoples Farming Council of LSSR was established in 1957, the Republican Trust for Cattle Growing and Feeding and its interregional bureaus for cattle growing and feeding were liquidated and transferred to the meat factories. Starting from 1986, the Meat Factory of Vilnius belonged to The Agro-Industrial Committee of LSSR. In 1990 the Factory was reorganised into a state enterprise, in 1994 it became a limited company, and in 2004 it was renamed to ‘Paneriai Investments.’ https://miestovitrina.wordpress.com/tag/vilniaus-mesos-kombinatas/)) and raising the mud of memory alone is effective already. Sometimes the mud is stirred in a rather unexpected and subjective way. It took me a lot of googling in order to find its location, and after finally visiting the place I suddenly encountered a long forgotten sliver of a memory somewhere in the dusty corner of my mind—during the soviet times one of my relatives was working as a car mechanic right next to the Factory. He used to tell me how the employees of the Factory were actually rather well off—while crossing the control posts, they used to smuggle the sausages under their reefer jackets or skirts, or they used to throw the packets with meat over the fence so the goods would later be picked up after work and given to the relatives or realised in the market… Back in the day it used to be called ‘the embezzlement of the socialist property.’ These goods were even used in business deals—for example, the deficit car parts for Zhiguli or Zaporozhets were exchanged for the pieces of raw meat (which was no less a deficit) and so on. The Factory is an almost marginal, peripheral relic (it is not The Palace of Sports or Žalgiris stadium after all) of the soviet Vilnius, a slowly eroding relic in the nooks and crannies of the minds of almost every citizen who still recalls the soviet times. And it is precisely those nooks and crannies that are brushed by Grėbliauskaitė’s work.

Furthermore, Grėbliauskaitė literally acquired a piece of Factory—the installation consists of a partly reassembled and relocated title ‘Kombinatas’ ( ‘Factory’) that used to decorate the facade of the Factory (the letters were found tumbled down and frozen onto the surface of the roof). Letters from the title ‘Vilniaus mėsos kombinatas’ frozen onto the roof of former meat factory in Vilnius, 2014. Image courtesy of the artist

Of course, first of all I would like to make a preemptive move and defend the artist from all the potential criticisms by saying that she, perhaps, did not intend to comment on or criticise the institution she is studying at. This is solely my own personal take—a take that I take the full responsibility for. However, the very context inevitably provokes me to turn toward this institutional interpretation, especially having in mind that her artwork was made during her studies—Grėbliauskaitė is a final year student at the Vilnius Academy of Arts.

One could certainly make a point by interpreting the Academy as a factory designated to process a certain mental material (or, as we would say today, ‘human resources’)—there is surely some truth in that. After all, certain departments of the Academy—especially those which claim to prepare the ‘real artists’—not only and not necessarily provide an education (because today it becomes increasingly difficult to define what ‘art education’ really is), but aim at programming the young(ish) minds, establishing/instilling certain truths, or even forcing students to come to believe—almost in a religious sense—in the mythology/hierarchy of the ‘real art’ or the ‘correct art.’ Needless to say that during the soviet times, indoctrination had a different direction and the ideological vigour itself was absolutely uncomparable.

Naturally, sometimes such mythologies of the ‘real art,’ by the virtue of being presented as universal doctrines, are grounded in a traumatised psyche of certain teachers who (mostly thanks to their experiences during the soviet era) suffer from a variety of inferiority complexes and who are also prone to conceit which takes increasingly grotesque forms… Surely, we should not interpret ‘Kombinatas’ only in a negative sense. However the notion of a student does evoke the thoughts of an innocent critter or a raw material ready to be processed into the ‘semi-manufactured produce’ or ‘purified’ into some more prestigious items. The result of such processes is what we call a ‘successful career of an artist.’ Not unlike a product—sausage or ham—of the year, it is labelled with ‘prestigious’ CVs which feature participation in foreign (sic) biennials, National Awards, or at least the “Lithuanian Artists Union badge”… These are all the necessary ‘certificates’ that verify the quality of the factory produce. They verify that the factory produce—high quality artists—match the necessary requirements of the ‘real art’ the consumption of which also certifies an ‘authenticity’ of a certain lifestyle or social status.

Here Grėbliauskaitė’s ‘Kombinatas’ inadvertently becomes a subtile parody of ‘cultural factory’ or ‘creative industries’—the notions that are trending in a contemporary art system—a parody that highlights the often unjustified pretence to content the lack of which all these magic words try to disguise. Speaking of the purely formal aspects of Grėbliauskaitė’s installation, it is perhaps a good thing that it ended up being exhibited in a public space instead of being tucked away in some gallery—hence its indisputable impact. Instead of claiming that the artwork is simply a specific installation in a specific space, I see it as a totality of intentions and actions (the way the original letters were discovered, why they appeared to be interesting, why it seemed to be a good idea to relocate and restore them, how were the letters transported, etc.). The artwork also benefits from the fact that the letters were ready-made—they were ‘appropriated’ and recontextualised by the artist. Were it the case that it was created specifically for the Academy and, even more so, if the letters were to be manufactured by the artist herself, the result would have turned out to be pure kitsch. It would have been artificially forced. However the installation benefits from the use of contingency and various contexts of meaning as opposed to the mute material provided (by the educators) as a clay. To sum up, we can agree that this specific whit of a text installed in this specific space simply ‘works.’

As for my part, I will only add that if the graduation were to be happening today, this very text would be an improvised positive review for Grėbliauskaitė’s graduation work.

Translated from Lithuanian by Tomas Čiučelis 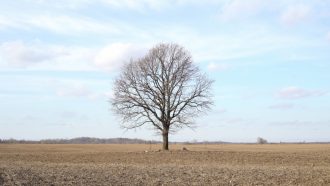