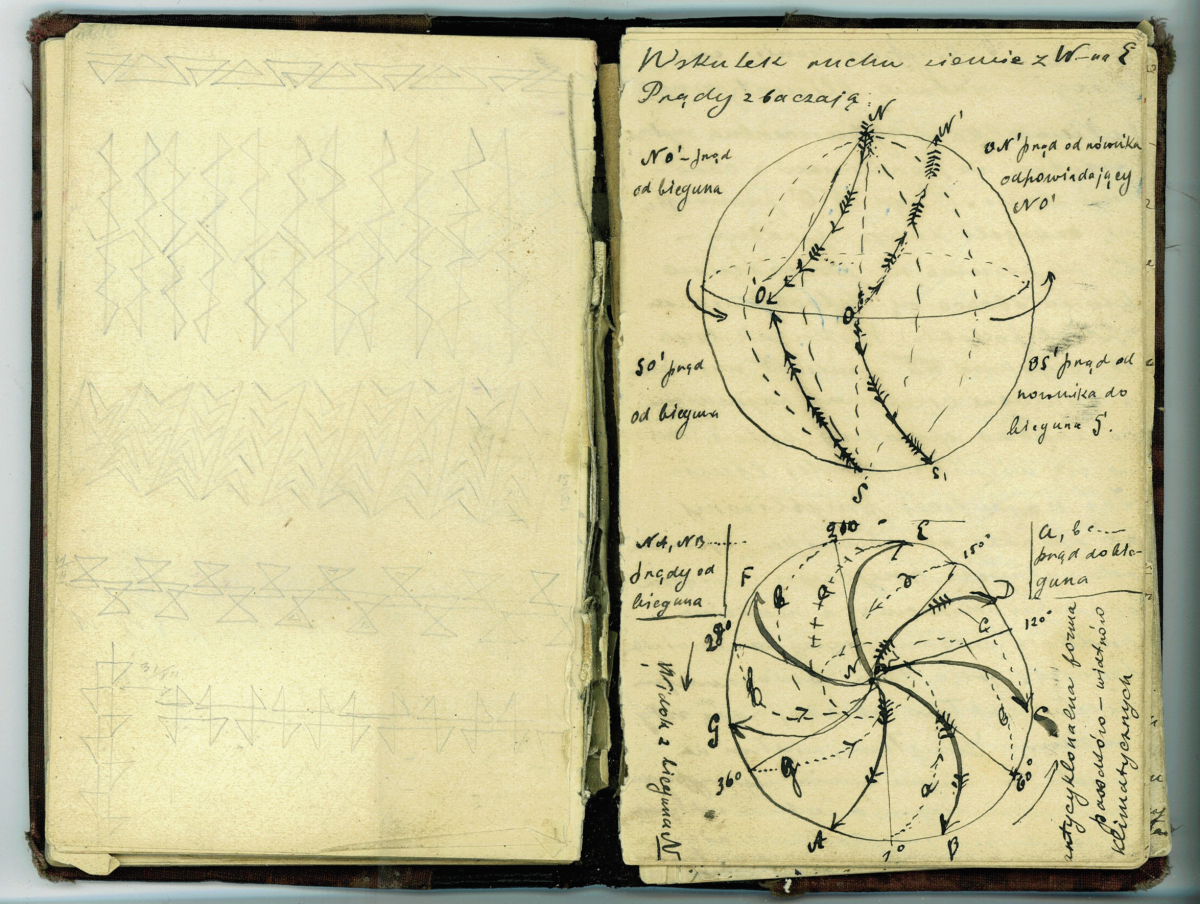 The exhibition Riga Notebook. Following the Lines of Wacław Szpakowski takes as its starting point the work and life of architect, engineer and avant-garde artist Wacław Szpakowski (1883–1973). Focusing in particular on the years he spent living and studying in Riga at the beginning of the twentieth century, the exhibition also engages other artists from different generations, placing them in dialogue with each other to form alliances across time and space and extend the different threads brought together by Szpakowski’s practice.

Wacław Szpakowski was born in Warsaw, Poland. His family moved to Riga in 1897, and he began studying architecture at the city’s Technical University in 1903. He developed a keen extracurricular interest in meteorology and studied atmospheric phenomena such as hurricanes, cyclones and storms, writing down facts and observations in his notebooks. Riga is also where he produced his oeuvre of maze-like drawings, each consisting of a single continuous line, which he would later explain in a treatise called Rhythmical Lines (1969). In 1911, soon after completing his studies, he moved back to Poland and began working as an architect and building engineer while continuing to make drawings in his spare time. Szpakowski’s work was not shown publicly until 1978, when a first exhibition was held at Muzeum Sztuki in Łódź.

Szpakowski was interested in the invisible rhythms holding the world together, the glimpses of order that can be discerned in natural phenomena, and the organization of life. He ceaselessly investigated these topics during field trips, making observations that would then be translated into numerous notes and, later, drawings. The works in this exhibition display non-figurative ways of seeing, understanding, representing and engaging with the world around us. Their abstract language suggests the possibility of an alternate reality or a world beyond words — a prospect that may still seem attractive now that our everyday language, in the face of rising populism, “fake news” and a lack of political imagination, so often seems to fail us. Could there be another way to expose our presents and imagine alternative future scenarios? What are artists investigating nowadays through abstract language?

The artists in this exhibition have picked up different threads from Szpakowski’s work, interests and language and brought them to new contexts. The Latvian exile artist Zanis Waldheims, who was based in Canada, has tried to understand the world around him and the inner workings of human behavior through the production of numerous works of geometric abstraction. Instead of presenting his research in writing, he gradually shifted towards visual depictions, realizing that the only meaningful way to express his findings lay beyond words. The artist Janek Simon has been concerned with the rise of nationalism and xenophobia in our contemporary societies. In trying to argue for a new inclusive universalism through form, he has been working with AI-generated algorithms, combining folkloric motifs from India, Africa, South America, Europe, and Poland to produce abstract mosaics.

Viktor Timofeev’s work opens up the relationships between drawing, architecture and world-making, juxtaposing architectural elements with the plant world and often using imagery drawn from gaming and dystopian animation. Evita Vasiļjeva’s concrete sculptures, pierced with steel bars, create a double association, reminding the viewer simultaneously of both a construction in progress and one that is deteriorating. Concrete is one of the most important materials associated with modernist architecture and is very familiar to those generations who grew up under Soviet rule; the crumbling condition of the concrete in Vasiļjeva’s work brings to mind questions about the legacies of former utopias, as represented by projects like that of standardized mass housing. Amanda Ziemele, for her part, is trying to break the geometry of the exhibition space by intervening in it with her paintings.

Hana Miletić’s work is a Jacquard-woven textile. In its form it refers to the history of automatization that revolutionized the textile industry and would later inspire the Analytical Engine, a rudimentary computer prototype developed by Ada Lovelace and Charles Babbage in the nineteenth century. In making us aware of the links between weaving and computation, Miletić challenges the traditional designation of the craft as a “women’s occupation”. The artist also manually interferes in the otherwise automated system, generating “glitches” in the pattern. Navine G. Khan-Dossos’s work is a visualization of the color code used for printing, which is the basis of all possible reproduced images. By bringing this scheme to the forefront of her work, she emphasizes the basic, often invisible mechanisms that underpin informational display systems.

Looking at the connections between early scientific exploration, photography and art—a constellation of fields to which Szpakowski’s practice was also connected—the artist Andrés Galeano rehabilitates meteorological glass plate negatives from the first Catalan Meteorological Service (1921–1939), producing condition reports detailing the damage done to them by time and in the course of their confiscation by, and negligent treatment at the hands of, Franco’s regime.

Alongside Szpakowski, this exhibition presents work by eight different contemporary artists, many of whom engage with forms of abstraction. By showing the manifold directions in which Szpakowski’s legacy has flourished and how the work of younger generations of artists can be understood as being in dialogue with Szpakowski’s output, the project also prompts us to consider new ways of looking at the artists of the modern avant-garde: ways of looking that emphasize the current relevance of their work while acknowledging the local, political and social contexts in which it was produced, as well as the histories of twentieth-century migration.

Co-organised by Muzeum Sztuki Lodz and the Latvian Centre for Contemporary Art.