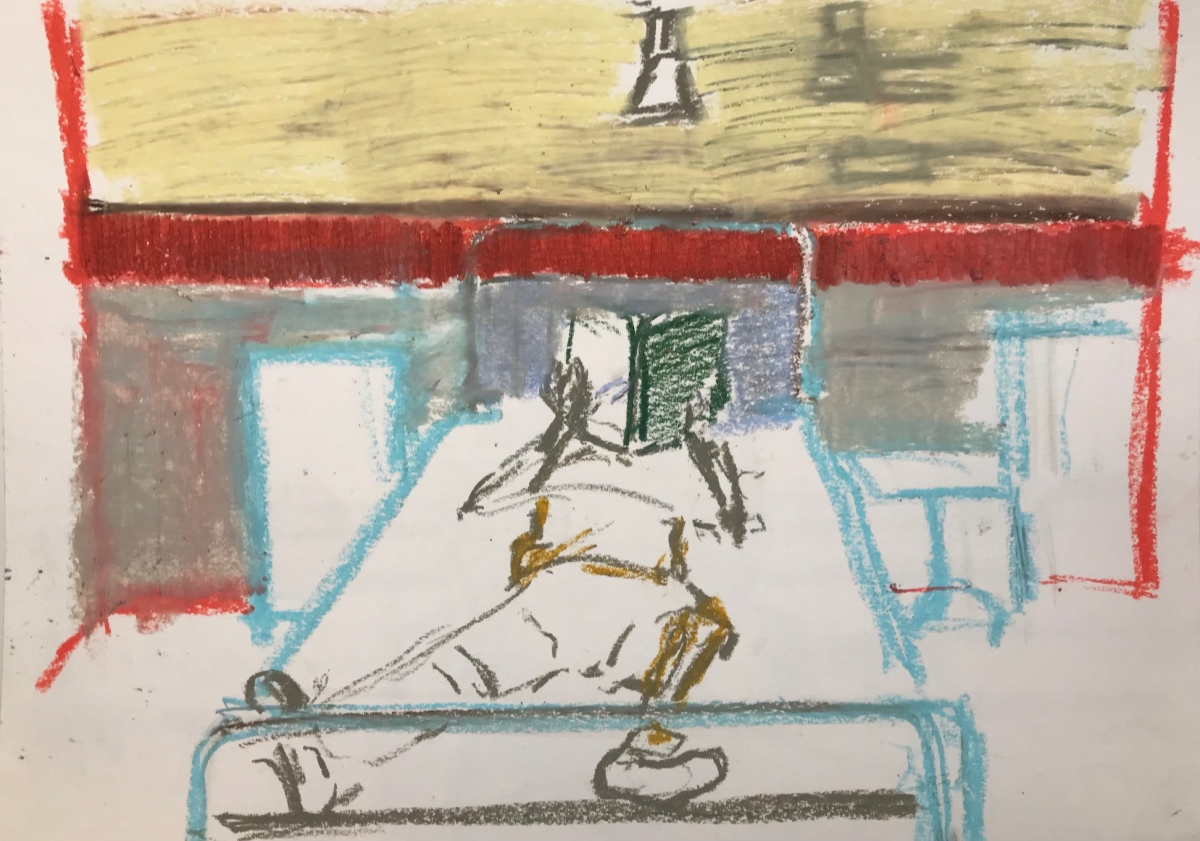 Drawings made after spending time in a hospital ward during a pandemic. Inspired by real events and people. On 1 December at 6 pm, Vilnius gallery Meno Niša invites you to the opening of the exhibition Plastic Crow by the National Prize winner Gintaras Makarevičius.

According to G. Makarevičius, the technique of oil pastel offers the possibility of approaching oil painting and, due to its plastic qualities, helps to convey intense psychophysical experiences tactilely. “The format of the drawing is not as cumbersome as other techniques on canvas or other surfaces. The spontaneous beginning of the drawing is important, so that the process of creating a drawing, which requires little preparation, is both comfortable and productive,” the artist said of his forthcoming exhibition.

According to the artist, the drawings created in the hospital ward during the pandemic were inspired by real events and people. Exposure to an intense environment awakened reflection of once-lived experiences, and together with his usual drawing expression, they mixed into sometimes phantasmagoric motifs.

“One of the more important reasons for the emergence and creation of this type of drawing is therapy. By drawing, I “unload” the fear of the future that I experience in the present and, perhaps one could say, sublimate in this way the ethics of not drawing a war in which I am not directly involved,” told the artist. The curator of the exhibition Plastic Crow is Dainius Liškevičius, consultant – Linas Jablonskis.

“We are honored to represent the painterly side of Makarevičius’ creativity, the side that lands on paper. We have been waiting for the artist’s second exhibition at the gallery for four years. This year, Meno Niša is celebrating its 20th birthday, which we will conclude with this wonderful solo exhibition,” said Diana Stomienė, the director of Meno Niša, inviting everyone to visit the exhibition.

Gintaras Makarevičius is a painter, scenographer, video artist, and documentary filmmaker. Initially, he studied architecture, but after becoming interested in painting, he continued his studies at the Vilnius Academy of Arts, Department of Painting (1988-1994). In the 1990s, like many artists of his generation, he traded his paintbrush for a video camera (although he has not abandoned drawing and painting to this day) and made his debut in the field of art as an artist of contemporary media – a creator of installations, objects, and documentary films, and became one of the first members of the Lithuanian Interdisciplinary Artists’ Association founded in 1997. Since 1995 he has been teaching at the Vilnius Academy of Arts.

Gintaras Makarevičius has participated in many prestigious international exhibitions of contemporary art, such as the Manifesta 4 Biennial of Contemporary Art in Germany (2002) and the La Rochelle International Film Festival in France (2005). In 2008, the artist was recognized with one of the most important awards given to contemporary filmmakers – he was awarded the main prize of the Lugano (Switzerland) film festival for the documentary film Winter Parallels. His works have been acquired by the KIASMA Museum of Contemporary Art in Finland, the MO Museum, and private collectors, and a series of wooden objects from his early years, Hair I, II, III, IV, can be seen in the permanent exhibition of the National Art Gallery.

Gintaras Makarevičius’ artistic activity also includes scenography. Having started his activity in the theatre in 1997, he is now one of the most prominent Lithuanian scenographers, designing sets for Lithuanian and foreign theatres. As a scenographer, G. Makarevičius has been awarded three Golden Crosses of the Stage. In 2017, he was awarded the Lithuanian National Prize.

The artist’s presence in the field of painting became more prominent in 2016 when he opened the exhibition Surrender at the VAA exhibition halls Titanikas. In 2018, his paintings were presented in the project area of the ArtVilnius’18 art fair, and in the same year, his solo exhibition of paintings Time Trap opened at the gallery Meno Niša.

The exhibition of G. Makarevičius’ drawings Plastic Crow will be open from 1 December to 14 January. The gallery is sponsored by Vilnius City Municipality.