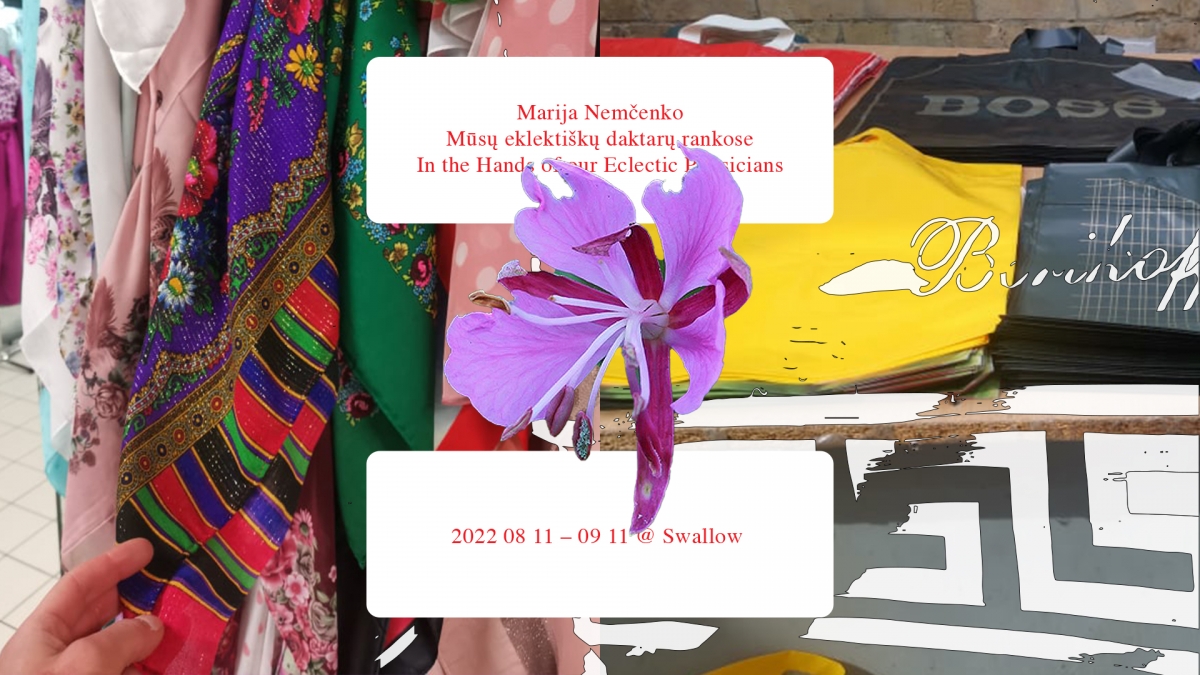 On 11 Aug, 6pm an exhibition ‘In the Hands of our Eclectic Physicians by Marija Nemčenko opening will take place at project space Swallow (Vitebsko 23, Vilnius).

Fireweed has woven, entangled, and taken root in this exhibition – a weed blossoming in midsummer, also nicknamed as invasive or even colonial. Not exactly welcomed by the human in his local ecosystem, the plant has its way of traveling – shedding its seeds where others don’t dare to go. Where the soil – or a roof, or a concrete pavement – has been marked by progress: by construction waste, railway tracks, oil spills, and other objects or weapons. Taking long budded root, fireweed sucks up poison as if a healer bandaging Earth‘s wounds.

Isn‘t it weird for a plant to be humanly invasive, alien, as if stumbled into the wrong private yard? The seed flies with wind, without following directions set by global logistical capitalism. In the face of ecological tensions – no, catastrophe – the exhibition follows the fireweed across calcified grids of consumption, looking for alternative epistemologies and healing movements. Movement from urban gardens and suburban meadows all the way to the makeshift stalls of local markets and neighborhood pavements – where communal insider agreements and unwritten rules are abundant; and the (non)human migration is a survival condition rather than a threat.

Visitors will be invited for fireweed tea (& more) which will be brewed from fireweed leaves collectively foraged, dried, and fermented during a workshop in July around SODAS2123.

Artist Marija Nemčenko lives and works between Glasgow and Vilnius. Member of Lithuanian Interdisciplinary Artists‘ Association (LIAA) and Scottish Artists Union (SAU). Her research activates cultural interlinks between Eastern and Central Europe and Middle East, which she explores through questions of migration, cultural stereotypes and historic parallels. Attending critically to the construct of a ‚periphery‘, the artist asks what knowledge arises from these ‚peripheral points‘? Marija‘s work is marked by high contrasts and humor driven by these clashes, as well as bright, eclectic aesthetics of everyday.

Exhibition is open until 11 September.